The full text of the Union’s statement reads:

“Today, 28th September 2021 is the International Day for Universal Access to Information (IDUAI), also known as the International Right to Know Day. The right to receive information is included in the Universal Declaration of Human Rights, and it is one of the most important personal and political rights that make it possible for citizens to have access to relevant information.

Recognizing the significance of access to information, the 74th UN General Assembly proclaimed 28th September as the International Day for Universal Access to Information (IDUAI) at the UN level in October 2019. The day had been proclaimed by the UNESCO General Conference in 2015, following the adoption of the 38 C/Resolution 57, declaring 28 September of every year as IDUAI. The theme for this year is “The Right to Know – Building Back Better with Access to Information.”

This theme highlights the role of access to information laws and their implementation to build back strong institutions for the public good and sustainable development, as well as to strengthen the right to information and international cooperation in the field of implementing this human right.

This year’s theme could not have come at a more opportune moment as The Gambia celebrates the recent signing into law of an Access to Information legislation by His Excellency President, Adama Barrow. The signing of ATI Bill 2021 into law makes it the first time in the history of The Gambia for the right of access to information to be legally recognised as a human right. The law is aimed at proactive and organised dissemination of public records and information to the people. The Gambia has now shed off its unenviable image as the last and only defaulting country in Anglophone West Africa with an access to information legislation.

The importance of the ATI legislation in The Gambia cannot be over emphasised. For many decades Gambians have not been able to access information like public records and information by public authorities making it impossible to engage the leaders and hold them accountable for their actions.

In the coming years, the effectiveness of the Gambia’s new Access to Information law will be put to the test. As such, this year’s theme resonates with the current situation in The Gambia, where a lot of uncertainty remains as to the implementation of the newly passed legislation. As the ATI law has the potential to hold government accountable and ensure that there is a high level of transparency in Gambian governance, a threat exists that government may deprive this legislation of the mechanisms it needs to make it effective. In addressing this solemn concern, the Chairperson of the CSO Coalition on ATI, John Charles Njie said “It is imperative that The Gambia government shows commitment to putting in place effective mechanisms for the mandatory disclosure of information, and that public information officials who willfully deny citizens their right to government held information must be sanctioned.”

Adding his voice to the issue, GPU President Sheriff Bojang Jr. also expressed the need for state authorities to ensure that “journalists and civil society have access to information on behalf of the population to hold those in power to account, to question decisions and actions made by governments in the name of those who elected them, and to create a healthy space for investigative journalism for accountable governance.”

On this day, the GPU reiterates its commitment to work with the CSO Coalition and the Gambian government to ensure the establishment of the requisite structures to make the Access to Information Act functional. The GPU also calls on the Gambian Government to ensure safe and transparent data collection, strengthen record keeping and enable accurate analysis, in line with international privacy standards.

Finally, in commemoration of 2021 International Day for Universal Access to Information in The Gambia, the GPU wishes to pay tribute to all partners who supported it in its drive to see an Access to Information legislation finally come into force in The Gambia. Your time, efforts, resources and dedication in ensuring that there exists a better space for freedom of information has not gone in vain. We look forward to working with you to ensuing that the right to information is at the centre of efforts to developing a more informed and resilient Gambia.” 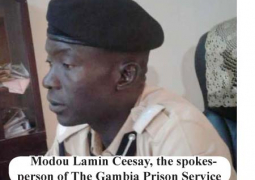 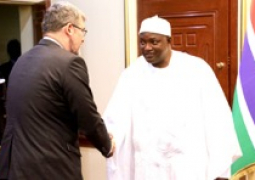 State House, Banjul, 21st October 2022: President Adama Barrow Friday, October 21st received
the Serbian Minister of State of Foreign Affairs, H.E Nemanja Starović, who was at the presidency
to deliver a personal letter of invitation from the Serbian President, His Excellency Aleksandar
Vučić, inviting the Gambian leader for a State visit to the Republic of Serbia. 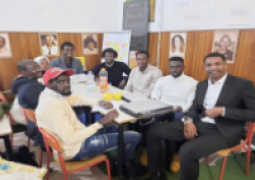 The Gambian-Italian Association of Students and Researchers (GIASR) is a non-profit organisation registered in Italy on 22nd November 2022.