“We must therefore work together, strengthen our resolve to dismantle criminal syndicates and ensure that The Gambia becomes a hostile territory to illicit drug traffickers and their patrons,” Gassama said in a statement read on his behalf by Ebrima Drammeh, DLEAG director of Operations during the University of The Gambia students’ week held at Tendaba in LRR. The theme for this year students’ week was: ‘UTG in the Frontline: Action for Peace, Social Cohesion and National Security in a Post Elections Gambia’.

Coumba Mathurin Diop, programme manager, UNODC Banjul Office, said: “The fight against drugs requires an integrated multi sectoral approach, a collective support of everyone and carrying out concrete joint actions like the one that brings us together today, related to prevention, treatment and care.”

Drug abuse and trafficking, she said, is crucial for UNODC as it celebrates the fight, on one hand, against drug use among young people and, on the other hand, against drug trafficking throughout the world. “All countries in the region are concerned by this danger and The Gambia must also develop mechanisms to respond to this growing problem by having a balanced approach between prevention and repression, demand and supply.”

“Drug trafficking poses threat to national security, hence there should be collective efforts from the government and stakeholders in ensuring that the menace of drug and its related activities is fought in the country. I want to urge the students to take advantage of the interface and I also urge the government and CSOs to mobilise public support to fight drug trafficking,” Momodou B.K. Ceesay, who represented the regional governor of LRR said.

Lagamy Drammeh, the UTG Students’ Union President said: “If there is any meaningful change that is to be championed, then it needs to start from the UTG, thus the students’ week is key.” 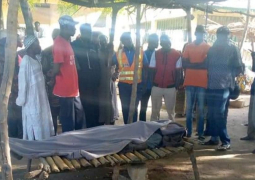 Tragedy struck the community of Kudang in the Niamina East District of the Central River Region when Bambo Darboe, a 56-year-old fisherman was reportedly killed by an unknown individual (s), The Point has been informed.

‘My very special tribute to my good and dear friend, late HE Dawda Fadera, Gambia Ambassador to the United States of America on his untimely death’

Life my friends and family sometimes provide us with unexpected occurrences and challenges that leaves us in shock and dismay, while leaving even the most faithfully religious and devoted to faith in God leaves with the question....