A spokesperson for the Alliance responding to The Point said they are impressed with the way and manner the Gambia Revenue Authority made ‘‘collections easier than ever before… transparent for not only Gambians but also foreign investors’’.

GRA, she added is facilitating ‘‘arrangements more eye-catching and attractive compared with many other places.’’

Thus, the official indicated that part of the bilateral meeting between The Gambia and Senegal would equally assist ‘‘positive political endeavours...rather than complicating matters’’.

The Alliance had recently delivered its most ''important recommendations'' on three central areas of transport cooperation: Connectivity, Road safety and Aviation respectively.

Emphasising on the importance of such Alliance, the European Commissioner for International Partnerships, Jutta Urpilainen, recently emphasised the EU’s commitment to building ‘‘close links between our two continents in order to unlock the full potential of our partnership with Africa…improved connectivity and modern infrastructure…’’

Responding further, the spokesperson added that they are pleased by the ‘‘diplomatic gesture employed by the Gambian delegation and particularly impressed’’ by accomplishment of Commissioner General Yankuba Darboe, over the years.

The GRA boss who is widely respected in Senegal as previous Customs and Excise border official was commended for suggesting that signatories cannot rely on domestic or national laws to hinder smooth transaction between nations’’.

Consequently, the spokesperson noted further that without such ‘‘frank meetings and discussions,’’ the Africa – Europe Alliance which was launched in 2018 to deliver on the recommendations and commitments taken by the 5th African Union-EU Summit held in Abidjan would be difficult to materialise.

This correspondent was also made to understand that the Gambia government has obtained ‘‘financing’’ from the African Development Bank in respect with the ‘‘Institutional Support for Economic and Financial Governance III Project.’’

Part of the funds is reported to be a grant for payments under the contract for Recruitment of a Consulting Firm to conduct network security audit for GRA.

The ‘‘Africa – Europe Alliance which was suggested by the European Commission two years ago demanded ‘‘equal footing between the two continents…strengthening transport cooperation.’’

Observers are optimistic that the bilateral meeting sanctioned by the two presidents: Barrow and Sall, will convince stakeholders to continue to respect arrangements including regional and international agreements. It will benefit not only the signatories but also foreign partners. 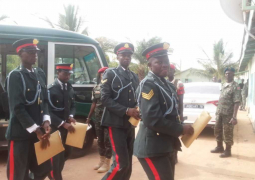