The 60th Ordinary Session of the Authority of Heads of State and Government of the Economic Community of West African States (ECOWAS), which was held on 12 December 2021 in Abuja, Federal Republic of Nigeria, has called on the international community to support the implementation of the sanctions imposed on Guinea and Mali. 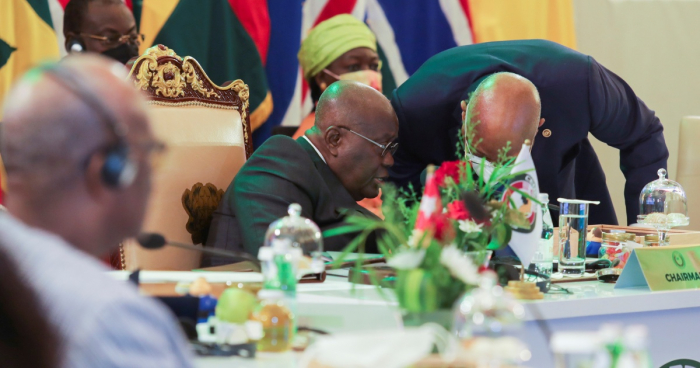 However, the Authority reiterates its will to accompany the Guinean authorities for a successful transition.

On the political situation in the region, the Authority reiterates strong concerns on the transition processes in Guinea and Mali. In that regard, the Authority notes the absence of clear indicators leading to the restoration of constitutional order in conformity with the Authority decisions.

“On Guinea, the Authority welcomes the recent decision of the transition Authorities to allow former President Alpha Conde to return home free. The Authority was informed by the transition Authorities that the National Transition Council will be in place by end December 2021 and will propose a timetable. The Authority remains very concerned that three (3) months after the Coup d’Etat, a timetable for the return of constitutional order is yet to be issued. It urges the authorities of the National Transition Council to rapidly submit the timetable for the election to be held within the timeframe indicated. The Authority insists on the need to hold elections within the six (6) months period previously decided on. The Authority decides to maintain the sanctions initially imposed.”

On Mali, the Authority took note of an official communication of December 9th from Malian Authorities informing ECOWAS that the timetable for the election will be transmitted at the latest on January 31st 2022, which could be discussed with an ECOWAS mission.

It also indicates that the electoral law for the single election organ (organe unique de gestion des élections) has been adopted by the Government and transmitted to the NTC.

“The Authority strongly deplores that the deadline of the 27 February 2022 for the holding of the elections is likely to not be respected. The Authority remains concerned over the risk for the region on the intervention of private security companies in Mali.”

“Consequently, the Authority recalls the urgent need to respect the date of 27 February 2022 to hold elections. It decides to uphold the initial sanctions already imposed. It also decides that, if by end of December 2021 and no concrete progress is made in the preparation of the election, additional sanctions will be put in place starting 1st January 2022. The sanctions notably include Economic and financial sanctions. The Summit requests the Mediator to inform the Malian Authorities of the decision taken.

The Authority further calls on the international community to support the implementation of the sanctions imposed on Guinea and Mali.”

“On electoral processes in the region, the Authority welcomes the successful conduct of presidential elections in Cabo Verde and in The Gambia. The Authority extends its warmest congratulations to His Excellency José Maria Neves for his election as President of the Republic of Cabo Verde and to His Excellency Adama Barrow, President of the Republic of The Gambia, for his re-election to the highest public office of his country and wishes them every success.”

“On the security situation in the region, the Authority remains concerned with the deterioration of the security situation in the Sahel, characterised by the recurrence of terrorist attacks in Burkina Faso, Mali, Niger, and Nigeria and the expansion of the attacks in the costal countries. The Authority strongly condemns these attacks and expresses solidarity with the affected Member States and populations.”

“The Authority reaffirms its determination to relentlessly combat the scourge of terrorism. To that effect, the Authority welcomes the recent conduct by some Member States of joint operations along the borders of frontline countries and directed the Commission to provide support for the planning and conduct of such operations within the framework of the implementation of the 2020 – 2024 Plan of action to eradicate terrorism in the Region.”

“The Authority further reiterates its call on Member States to fulfill their pledges on the voluntary contributions into the dedicated fund to support the implementation of the 2020 – 2024 Action Plan.”

The Gambia has registered 13 new positive coronavirus cases, bringing the total cases ever confirmed since March 2020 to 3,910.