The mood in the Southwest of Germany, where most have seen a continuous deportation threat, has been somewhat somber, derailing and depressing since another flight carrying over 20 young Gambians landed at the Banjul International Airport in the early hours of Thursday morning, 4th March 2021.

Speaking to a few Gambian migrants in Germany who preferred to be anonymous, many who are asked or threatened to leave Germany are battling sleepless nights as they seek for alternatives to deportation.

SINYAN (not his real name) - "For me I had to leave my room at night and go where I think I can be a little bit safe. Because I am not working so they can't also arrest or pick me up at work like they (German authorities) normally do to others."

"My situation has been unstable since I arrived here in 2017 from Italy. Maybe I may have to consider going back to Italy," he said.

BOBO (not his real name) - "News like this always gives us sleepless nights but president Barrow and his people are very self-centered to think about the causes their actions normally do to us. For people like me I am responsible for my family back home and suffer with the heavy job I do here to be able to assist them.”

SARUBA (not her real name) - "For me as a single mother trying the best for my child, the news has made things uncomfortable for us. When I was coming I borrowed so much money to come here through the ‘back-way’ (by sea) and until today I am paying back the money bit by bit. So why is he (Barrow) so particular taking us back when he cannot provide for even those at home?"

GULLY (not his real name) -"For me I blame it all on Barrow. He should know that we are adults and would do and go anywhere we feel like to go in this world and he can't stop us. Let him also know that these Europeans are fooling him. It's time he wise up. I came here in 2014 and I am fully responsible for my family in Gambia.”

Hundreds of thousands of families or households directly benefit or depend on remittances from relatives or children abroad in a bid to alleviate their lives from poverty.

Although majority of the interviewees blamed President Barrow for the deportations, this report cannot ascertain any of those claims.

The government has been under intense criticism and accusations of arbitrary involvement and contribution in facilitating the mass deportation of Gambians since 2018 when the whole deportation issue started under the current Barrow administration. The  many Gambians - home and abroad - have been lavishing a sour pill of anger on President Barrow and his government over the growing crisis which leaves a dark cloud over their heads, with some calling the 56 year old "selfish", "ungrateful" and "jealous" on social media recently.

Baden-Württemberg is one of Germany's 16 federated States bordering France and Switzerland and is reported to be housing over 4,000 Gambians, both male and female. Overall, 16,000 Gambians currently live in Germany with about 4,000 under threatening situations amid potential deportation after their asylum applications were allegedly rejected by the German Federal government.

Over 7,000 of the 16,000 Gambians in Germany currently hold jobs as at February 2021, according to the German Statistics Agency “DESTATIS” and the German Federal Agency for Employment. 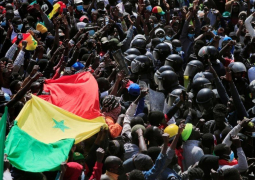 Scores of women in The Gambian media have told The Point that despite women forming the majority in media, they are still marginalised in holding editorial positions in contrast to their male counterparts.

CA affirms party is united amid resignation of national president

The Citizens' Alliance (CA) has avowed to its membership, supporters and the public that the party is united as ever before and that it is still true to its core values as a political party.