Aside of the president’s term limit which they were not happy with, the cabinet had lots of issues with some clauses and they wanted improvements on other issues like the chieftaincy, local governance issue, citizenship issue and a whole range of issues.

“We looked at more than 23 different clauses in this Constitution that we as cabinet submitted to the CRC as part of our position probably that could be considered for either review or improve on.”

“There are also clauses that we don’t agree with,” the minister said.

He was, however, quick to note that this does not mean the draft should have been rejected, saying it was a progressive bill.

“I have said this is a progressive constitution; you cannot have a constitution that is where everybody has a unanimous view on.

“Personally there are lots of clauses in the constitution that I thought could be improved on because those ones by universal standards fall short of the acceptable standards.”

The minister said the cabinet has no authority over the legislature.

“We have a number of things that were not looked into, but we accepted in faith because we knew this was our process, we took it to the National Assembly and we have no control of what the legislature does.

It is important, however, to note that no member of the cabinet including President Barrow threw their weight behind the Draft Bill while at parliament.

A political analyst said Barrow played his cards well by passing the bill to the parliament on time and untouched after reviewing it.

However, the analyst said Barrow also missed the opportunity to prove to Gambians, the majority of whom wanted the bill to go through that he is not power hungry and he is 100 percent behind the draft while it was in parliament.

It is reported that some of the 23 lawmakers who voted against the bill are allied to the president and did so to prevent the Draft from passage that would have counted Barrow’s current term and given him just one more chance to lead The Gambia. 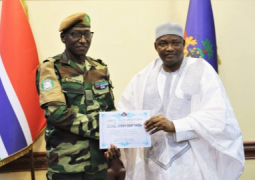 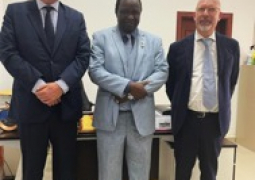 The Honourable Minister of Interior, Seyaka Sonko recently received in audience the European Union (EU) ambassador to The Gambia, His Excellency Corrado Pampaloni and the deputy director-general in charge of Horizontal Affairs and Migration, at the European Commission, Mr. Johannes Luchner.