Speaking to the media over the weekend, the CEO and co-proprietor Lamin Gassama  said: “The company was established to complement the ideologies of the government in making Gambia a priority by leading its domestic industries for better services.”

“It aims to complement the efforts of the Gambia Civil Aviation Authority and Gambia International Airlines in the effective implementation of both aviation security and ground handling in making The Gambia among the safest flight destinations in the world. AEASS is offering security profiling of passengers, passenger protection, aircraft protection, baggage escort and security, cargo security, catering security and facility protection.”

Chief Executive Officer Lamin Kassama further stated that the company is established to support the Gambia Tourism Board and tour operators like the Gambia Experience. “The company will work hand-in -glove with the Gambia Civil Aviation Authority and Gambia International Airlines in the implementation of security standards and recommended practices in Annex 17 of the International Civil Aviation Organization (ICAO).”

He advised the staff to conform to the rules and regulations of the airport and to understand that they are the face of The Gambia because they are the first and last contact persons connecting The Gambia to the world.

According to Mr. Kassama, the road has been rough for him and his colleagues as the authorities have given less privileges to them when compared to the foreign owned Airline Security companies at the airport. He cited that he even requested to use the training facilities of the airport to train his staff but no response was received to that request. However, other companies conducted more than three training sessions.

He thanked the management of Gambia International Airlines for their continuous support to his concept of establishing the first Gambian owned airline security company.

According to Modou Sowe, the general manager, the existing private airline security companies in the airport are 100% owned by foreign investors. “It is time for Gambians to venture into the businesses to support the country’s economy.”

He further highlighted that 80% of the proceeds of this foreign companies is being siphoned out of the Gambia while it could have been used to support our citizens’ economy.

“The staff welfare of some of these companies is being under question, since we have seen some of their staff protesting on QTV this year. This is the time for the Gambia to take over its aviation industry, the Afro-euro Airline Security Services is by the Gambia, for the Gambia and in the Gambia.”

He urged the staff to support the government especially the Gambia Tourism Board and Gambia Experience in attracting more tourists to the country.

GTU SG calls on gov’t to invest in teachers

Marie Antoinette Corr, secretary general of The Gambia Teachers Union (GTU) has called on government to invest in teachers and give priority to them in education efforts to ensure every learner has access to a qualified and supported teacher. 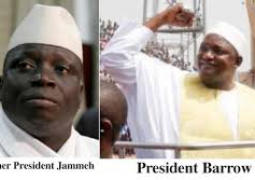