At the time of going to press no suspect (s) was arrested in connection with the matter. However, security officers in the region were investigating the matter.

A source who spoke to our reporter on the condition of anonymity said so many of those who sustained serious injuries were referred to Basse Major Hospital and others were taken to Fatoto Hospital in the Kantora District of URR.

Our reporter has been reliably informed that the compound of one Lamin Susso of Waliba Kunda was set on fire, while Alfusainey Mballow’s fence and some of their food stuff were allegedly destroyed.

A youth from Perai Tenda village who spoke to our reporter and didn’t want to be named claimed that the land in question belongs to Perai Tenda and that they have been farming on the land for decades.

He also dismissed reports suggesting that the people of Perai Tenda first attacked the people of Waliba village. He added: “As far as I am concerned that’s not true. Remember this year, there was a judgement conducted by the seven chiefs of URR with regard to the said land. The seven chiefs concluded and divided the portion of the land and put a boundary between the two villages.”

“However, we didn’t accept the judgement made by the seven chiefs on the grounds that we realised that about 500 to 600 hectares were taken away and that land used to be cultivated and owned by our people. We then decided to appeal against the chiefs’ judgement and took up the matter to the High Court.”

As far as we are concerned, it’s the High Court that authorised our people to go back to their land and farm and the same letter was given to Waliba Kunda and some stakeholders in the region.”

For his part, Gibbi Jawo from Waliba Kunda village, who is part of the wounded people, said they were attacked by the People of Perai Tenda village which resulted in the injury of more than 10 people from their village.

“The people of Perai Tenda attacked us up to our village and destroyed some of our properties including food stuffs,” he stated, adding that immediately the judgement of the seven chiefs was made, the people of my village started cultivating the portion of land given to them by chiefs.”

“To our surprise, the people of Perai Tenda have already mobilised themselves and came with tractors and uprooted the groundnut that we have already cultivated. They also attacked a girl who took breakfast to his father at the farm land and beat her. We later invited the PIU personnel. Immediately, the PIU personnel arrived, the people of Perai Tenda attacked us with stones and cutlasses wounding others in their heads and eyes.”

A letter seen by The Point signed by regional governor Fanta B.S. Manneh and addresses to the alkalo of Waliba Kunda dated 1st July with the headline: “An order and ruling of court between Waliba Kunda and Perai Tenda village,” states: “I am directed to inform you that directives have been issued by the High Court of The Gambia as per Hon. Justice N. Wadda-Ceesay brought under the enforcement of the court’s supervisory jurisdiction under section 23 of the court act and section 133 of the constitution unquote that the decision of the group Tribunal in respect to alkalo of Waliba rep. by Musa Jawo versus Mankamang Sanno on behalf of the alkalo of Perai Tenda delivered on the 11th day of June 2020 shall be stayed until the certiorari application filled before the High Court shall be finally determined that status quo ante shall be maintained as it was before the judgement of the group tribunal.” 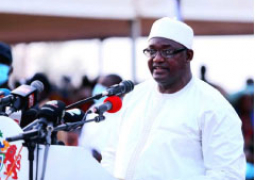 Barrow asked to approach  development in a different way

President Adama Barrow has been tasked by multiple Gambians to appoint competent people into his new cabinet.

His Excellency President Adama Barrow has declared all “lumo” markets throughout the jurisdiction of The Gambia open.

In a small village of Palang Toro in Niani District of Central River Region lived a 28-year-old school drop-out.  He was born and bred there.

The village was almost deserted of able-bodied men, particularly those in the age-bracket of 25 – 35 years.  They took the ‘backway’ – a popular local Gambian parlance for irregular migration to Europe through the Sahara Desert and the Mediterranean seas.