Wuli West to get electricity, water supply if…, President Jammeh

President Yahya Jammeh has said that the forthcoming presidential election scheduled for 24th November 2011 will determine whether or not the people of Wuli West constituency in the Upper River Region will be provided with portable drinking water and electricity supply.

Jammeh’s comments followed appeals by the community of Sutukonding and its surroundings in Wuli West constituency, for government’s intervention in providing their villages with potable water and electricity.

“If it is about elections, I will not stand here in Wuli West because sixteen years from this year, you the people of Wuli West did not vote for me, but I won elections. So your ballot did not stop me from winning,” Jammeh told a meeting in Sutukonding, Wuli West constituency last Thursday as part of his meet-the-people tour.

An opposition stronghold, Wuli West constituency has over the years rallied behind the opposition Peoples Democratic Organization for and Socialism (PDOIS) and NADD.

The National Assembly seat for Wuli West constituency in the Upper River Region is held by honourable Sidia Jatta of the opposition party, called the National Alliance for Democracy and Development, NADD.

“For sixteen years, you said you don’t want me and you expect me to reduce the load on you. That would not happen, and I will not leave those people who want development for those who do not want development.

“I will not do that because, if I do so, it means I betrayed those who are in for development,” he said, adding that if any area does not vote for him, come 24th November, those areas will only dream of water and electricity, but will not get government’s electricity and water supply.

According to President Jammeh, his government will construct the road linking Wuli to Basse, “because it belongs to all of us”.

“But if you the people of Wuli West stand like the people of Kiang West (also an opposition stronghold), that would be the time you will know who is Yahya Jammeh,” he told the meeting.

“Wuli West, especially Nyakoi, was among the first areas where we built a senior secondary school in 1995, which you were yearning for during the colonial days and the PPP regime, but never got.

“Over the past 10 years, you voted for your National Assembly Member who has never aimed at providing you with a lower basic school, and still now you said that individual will serve you as your representative at the National Assembly,” Jammeh told the gathering.

He stated that the election is all about improvement and under-improvement, noting that the people of Wuli West don’t want improvement.

“So you expect me to give you water and electricity? That is left to you, because I told the entire country that my mission was to develop The Gambia, and I said this when I was in uniform,” he added.

Speaking at an earlier meeting held in Baja Kunda in Wuli East constituency, President Jammeh underscored his government’s commitment to reconstruct and modernise the road linking Wuli East and West to Basse.

This also followed appeals by the villagers for the government’s intervention in constructing the dilapidated road.

“You have all the right to complain for not having something that you truly deserve, but by the grace of God, I will build it to standard just like the Mandina-Ba-Soma road.

“The reason why I don’t want a feeder road in the area is because if I can provide the Baddibunkas, who opposed me, with a standard road, why not you people who have been standing by me since day one,” Jammeh stated.

The Gambian leader handed a total of D120, 000 to some farmers who were owed by the Gambia Groundnut Corporation as settlement for the said arrears.

Also speaking at the Sutukonding meeting, Jatto Sillah, minister of Forestry and Environment, who is the ruling APRC party’s liaison officer, urged the youths of Wuli West, especially of Nyakoi, to rally behind the ruling APRC party, urging them to distance themselves from the opposition.

The ministers of Works, Construction and Infrastructure, and of Communication, Dr Njogu Bah and Alhagie Cham respectively, all highlighted the development projects registered under President Jammeh since 1994. 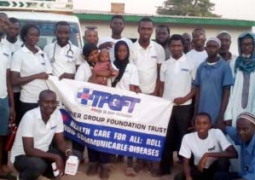 Freed journalists speak to The Point