The treason trial involving Lt General Lang Tombong Tamba, ex-chief of defence staff and Rear Admiral Sajor Fofana, ex-chief of naval staff, yesterday failed to proceed at the special criminal court in owing to the absence of the prosecution witness.

When the case was called, the principal state counsel, S.H. Barkun, told the court that he received instructions from the Deputy Director of Public Prosecutions for a stand down of the case, as he had a judgment in another court.

Defence counsel L.K. Mboge rose and informed the court that he was strongly opposed to the application for a stand down.

“My lord, this is because the DDPP spoke to me this morning that he had a judgment before Justice Jobarteh, and I told him that that judgment is not more important than this treason trial, as the case was for continuation of hearing,” counsel Mboge submitted.

The prosecution, Mboge added, should know that the case is a treason trial.

Justice Ikpala, however, granted the prosecution’s application for a stand down, and the case was stood down for thirty minutes.

The DDPP M. Abdullah appeared for the state, while L.K. Mboge remained for the accused persons, when the case was recalled.

Abdullahi again told the court “since in the morning, we have been waiting for our witnesses, but unfortunately they did not turn up, I therefore apply for an adjournment to enable them come at the next adjournment date.”

Counsel LK Mboge then stood up again, and intimated to the court that the prosecution did not advance sufficient reasons in applying for an adjournment. He adduced further that there are no other reasons for witnesses not coming to court.

“My lord, I will give them the benefit of the doubt, and if the prosecution fails to produce their witnesses at the next adjournment date, I will urge the court to close their case and allow the accused persons to open their defence,” counsel further submitted.

The case was then adjourned till 8 November 2010.

Tamba and Fofana were indicted on four counts of treason, conspiracy to commit treason, concealment of treason and treason in connection with the 21 March 2006 abortive coup allegedly masterminded by ex-chief of defence staff Colonel Ndure Cham.

On Wednesday, the accused persons were again escorted to court amid tight security with both hands cuffed and feet shackled. At the end of the proceedings, it was noticed that they had to be aided by the escorting security personnel to board a waiting vehicle, which took them back to the State Central Prison at Mile 2. 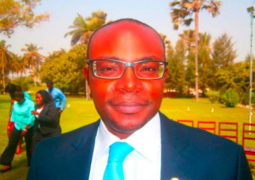