Bad leadership in Africa is responsible for the continent’s backwardness, said Sidique Wai, president and spokesperson of United African Congress .

Mr Wai, who made this assertion at a workshop on poverty eradication held during the just-concluded 9th Youth Assembly at the United Nations Headquarters in , accused African leaders of overstaying in power and thus entrenching themselves, their families and close associates to the detriment of the masses.

“Our leaders are responsible for Africa’s problems,” he said, while addressing young people from and elsewhere.

According to the US-based Sierra Leonean, African politicians mainly involve African youths only during elections, after which they care less about their plight.

He also stated that good governance, human rights and democracy are a perquisite for development, an area, he said, in which the continent needs to do more. Investing in the youth, he added, should be a priority for all African governments.

He also challenged African youths not to wait for their leaders to develop them, but instead let them take charge of their own destiny.

In his view, it is high time the issue of youth programmes be conditionality for any foreign aid to .

“Tackling the issue of youth unemployment should be a priority for African governments since it’s paramount to the continent’s development,” he added. 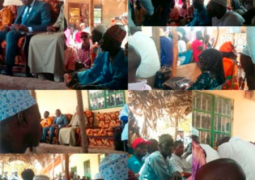