Two Gambian children namely Mariama Dumbuya and Mustapha Jallow both from Global Unification and Children for Children Organisation (CFCO) respectively on Sunday left for the Children's TUNZA conference in . Organised by the United Nation's Environmental Programme (UNEP), the conference aims to bring together children from all over the world to participate in a burning global issue on how to protect our environment.

This year's topic will bring together children with different ideas to socialize and learn from each other's cultures and beliefs, in short to create peace and understanding amongst the younger generation. Each child is chaperoned by an elder from their organisations.

Mariama Dumbuya and Mustapha Jallow expressed their delight, excitement and enthusiasm over their trip to Daejon as it is more of an adventure and an educating one.

Year before last, Abdoulie Badjie of CFCO left for then later for for the same Tunza Conferences. He spearheaded the idea of children's tree-planting group after his return to the from the TUNZA conference in . 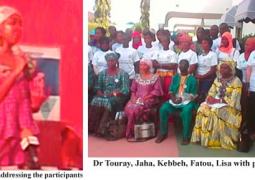