To my grandfather whose mother was a Nyancho

Kabu was a Mandingo stronghold, centre of fame, residue of ancient Mali Empire - At the peak of its glory before Kabu became Dismoded and wrought to its knees, they were ruled by a Nyancho clan Known as the Sannehs’ and Mannehs, their King was called Jankeh Wali Sanneh, a deity was made of their clan and were revered As royals of high mortals unrivalled and unmatched like the medieval Knights, renowned for their endurance and excellent military techniques They ruled in autocracy for two hundred years and more before their Kingdom became the Waterloo of the Nyanchos awash with destitute.

To my maternal grandfather Alh Baboucar Wadda whose mother Malen Sanneh, of Sindong, Casamance, was a Nyancho and her Ancestors the Nyanchos of Kabu, perceived as an isolated fear Ruled in autocracy and ruthlessly conjured more lands until  The Fulani people oppressed for so long rose against them with Thirty five thousand armed soldiers on foot and husbandry.

The Nyanchos labeled as lethal by their enemies retaliated and amassed a battalion of fierce warriors and mercenaries.

Victory was the Nyanchos' hall mark a trademark, exploited by Soothsayers searching for prediction and symbols mistook the fleeting beauty of the soapsuds clouds, as definitive sign of good omen. Unknowing to them that the battle waged was eloped In an avalanche of calamities and set for catastrophe, Hark! The talking drums at the battle front are disseminating news In wailing tone the drums, announced a communal obituary:

Oh! People of Kabu your men would be late tonight, severely outnumbered in tenfold they have nevertheless staged a devastating hard fought battle, but failed to get a foothold of the enemy.

In disproportionate numbers they lay still on the pristine grass of the open , draped in blood their fatal wounds oozing for the loved ones

They would never see again and the death of their ruptured kingdom.

Oh! People of Kabu your men have suffered an irreparable defeat The newly crown Victors would soon stride in leashing out a reprisal of Great enormity- no victory song would be heard tonight or legendary tales of their prowess at the Bantaba or town square,

The obituary announcement was received in tumultuous anarchy,

Struck grieved person was painful to see, but the Queen mother and princesses of the royal household quickly became composed.

No one they said would be turned into a pillar of salt.

They torched the Royal household with it all their valuables,

Adorned in their best attires and fine jewelleries, they strode sorrowfully to The Banataba, bade farewell to their subjects and lamented as Could not be stave off, our Kingdom has been disrobed.

The infirmed and weak would be mutilated our women folk defiled,

To escape as an act of perpetual preservation of our lineage,

This act of succession is extended to all of you.

Ah! Tonight; they prophesized our wells would entomb the jewels of

Kabu but when the sun rises up again it would be our Monument.

The Olympic body of the human being, in pandemonium of

Sacrificial drowning was in motion in twosomes and threesomes,

The Jewels of Kabu mused in dignified haste, plunged, gulped,

Writhed and disappeared into exiled. Their bodies sculptured in the

The legacy of Sundiata Keita, of ancient , their obsessive

Infatuation of image differentiation earned them the

Birth certificates of high mortals; the inhabitants of Kabu bonded

In communal loss put an act of defiance with unfettered patriotism.

They refused to escape, no one they said would surrender or

Capitulate in servitude, like comets they rampaged and destroyed

What have been created and tediously toiled.

Embroiled in euthanasia of maternal love they poisoned their little

Children and infirmed; stampede their livestock, disleaf the fields

Leaving them charred and smothering - depriving their Victors the

Glory of their conquest, with the fabric of their Kingdom smothering in

Ruins they threw themselves in the choking wells, gorged dried of water.

With bodies writhing to the very brink, they asked others

To set them on fire, the intensity of the viral fire flared up leashing

A thick sickening smoke engulfed and shaped by the wind in

A spiral form of a wailing woman, tossing it high up as fiasco signal for

Those at the battle front to see, the talking drums speedily aligned the

Signal and news of the calamity to the remnant brave at the battle field.

Upon hearing the news and spotting the magnetic signal, they heaved

With elation and relieved; fettered from shame and moral obligations

The Nyancos surged forth in their traditional chauvinism with

Their fate intertwined with the calamity that befalls their land.

Their martyrdom permeated by the chattering strings of the Kora

And opera voices of the griots, they composed a fixating, stimulus

This relic song polarizing their heroic sacrifice is now a personification

Inland ; this rare divisive martyrdom have earned them

Out shining the singular victory of their gallant victors whose glory

Have been scuttled like udders of a lactating cow never to rebound. 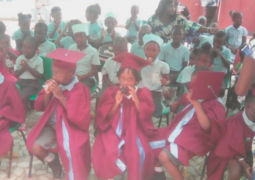