From the aspect that they have appeared within the framework of God’s universal plan for the world of existence wherein each of their parts is necessary for the perpetuation of existential motion along with the fact that they have a role to play in realizing the very goal of Creation; all things, whether engendered creatures or legislated law, fall within this domain.

It is He who has sent His Apostle with the guidance and the religion of truth.... (9:33)

2. JUSTICE IS CURRENT THROUGHOUT EXISTENCE

Despite the fact that theological discussion and disputation which took place among Islamic schools of through would sometimes arrive at definitive conclusions wherein at times proponents of justice would emerge as victors in the debates and at other times their opponents (albeit by instilling doubts), what is indisputable from the viewpoint of a Muslim is that justice, in whichever sense it is construed, begins with divine justice. Moreover, the term is understood with the very same meaning which the Glorious Quran has explained and which has both an essential and practical manifestation in each and every atom of being.

The point is that the concept of ‘universal justice’ is a powerful spiritual force and factors in the beliefs of Muslims. It plays a role in the question of whether there is justice in the world. In contrast, injustice and oppression, views independently, are considered as causes of annihilation and degeneration.

This is a brief account of the Muslims’ general viewpoint with regard to this issue and we will suffice in to that. Let us end this section with a few verses on the topic:

The word of your Lord had been fulfilled in truth and justice. Nothing can change His words...... (6:115)

So there lay their house, fallen in ruin, because of their wrongdoing. (27:52)

....The will find present whatever they had done, and your Lord does not wrong anyone. (18:49)

We shall set up the scales of justice on the Day of Resurrection, and no soul will be wronged in the least.... (21:47)

Allah bears witness that there is no god except Him-and [so do] the angels and those who possess knowledge-maintainer of justice.... (3:18)

On you who have faith! Be maintainers of justice and witness for the sake of Allah... (4:135)

3. LOVE IS THE BASIS OF THE BOND THAT TIES THE VARIOUS PARTS OF BEING TOGETHER

A Muslim, under the aegis of the Glorious Quran, believes that the world of being is founded on kindness and affection and [that] relations between the Creator and His Creation are based on [mutual] love and devotion. The essence of the relations between created beings having a common goal and instilled with divine value is also based on love and devotion. The relationship that the believers of the world have with the various parts of the world of existence which are not endowed with human reason is based on reciprocal and affectionate love as well.

The reasons and grounds for this love are, under the auspices of Islamic beliefs and Quranic teachings, completely clear and manifest. If we look at the amiable and loving relations that exist between man and his Creator, we will see a most noble loving relationship whose levels differ depending on the individual in question: it begins from the expediential, albeit overflowing love, of the common man, to the pure and conscious love-which itself is expressive of the pinnacle of this lofty meaning-of the saints and sincere servants of God.

Islam is endowed with the characteristic of ‘starting everything with the basics’. This applies to the amiable and loving relationship between man and God, which it initially bases on expediency and then raises it [to a higher level] by making it part and parcel of man’s being. Thereafter, it brings it out as an inner motive in controlling man’s conduct and as his guidance to the benefit of humanity. But the love and affection which is from the Almighty, no matter how simple in the hearts of the believers, evokes the very same human resonations and conceptions of love among living creation. In reality, however, it shows the mode of expressing God’s love and bestowal and the even-increasing volume of His kindness and generosity.

That initial conception or understanding at first glance exists even in the most devout believers of God. This conception is, in its turn, ideal and desirable, because in one sense love denotes ecstasy, ardour, eagerness, and a burning desire, and Quranic verses have always emphasized different ways of evoking emotions and kindling feelings for God the Almighty. One example is the very conception that God the Glorified spreads the shade of His love on His devoted servants. Every human being can, by recourse of their readily disposed conscience in such circumstances, attain certitude with respect to this matter.

Islamic source verify the existence of a loving relationship among informed believer-which include the righteous, the penitent, the immaculate, the abstemious, the forbearing, those who put their trust in God, and those who fight in the way of God:

...who love those who migrate toward them, and do not find in their breast any need for that which is given to them, but prefer [the immigrants] to themselves, though poverty be their own lot....(59:9)

Quranic verses and [Prophetic] traditions have also established [the existence of] an amiable and loving relationship between man and nature. It considers emotion of the nature of man’s emotion from the perspective that nature is at his service and (it) is for his convenience and that God’s gracious hand has blessed the earth and its produce.

It has been reported that the Noble Prophet (s), when returning from the battle of Tabuk and on reaching the threshold of Madinah, said: This is Taba and this is also Mount Uhud which love us and which we also love. (Safinah al-bahar, p. 668; Sahih Muslim, vol. 2, p. 1011 and Sunun Bayhaqi, vol. 6, p. 72) The Noble Prophet (s) has also said: Love and affection for one’s motherland is a part of (or emanates from) faith. (Mizan al-hikmah, vol. 10, p. 522)... 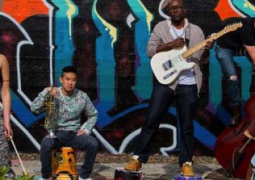 GMC calls for repeal of draconian media laws, others