The Secretary of State for Youth and Sports, the Honourable Mass Axi Gai, presided yesterday over the inaugural ceremony of the National Organising Committee (NOC) for the National Youth Conference and Festival, NAYCONF, scheduled to take place at Farafenni in December, 2008.

Addressing the committee at Independence Stadium, SOS Gai said that President Jammeh has put youth matters atop the agenda of his government noting that the government and its partners will do everything possible to support the upcoming event.

Secretary of State Gai told the committee that the success of NAYCONF lies entirely on the hands of the NOC and called on them to make sure that they properly plan and implement the activities of the event.

"NAYCONF has not been budgeted for but I will do everything possible with the help of my able technicians to raise funds for the program," he said.

Speaking earlier, the chairperson of the National Youth Council, Mr. Alhagie Kebbeh, said that in 2006 when the event was hosted in Brikama, the major constraints were financial and organisational problems at the regional level.  He added that it is the responsibility of the host region to better prepare itself for the task that lies ahead.

He also used the occasion to commend President Jammeh for his generous support during the last NAYCONF in Brikama.

Mr. Malang Jassey, Director of Youth and Sports, said NAYCONF is a forum where the views of young people are taken into consideration and talents are identified in the area of sports.

Other speakers at the occasion included the executive secretary of the National Youth Council, Pa Malick Ceesay.

The biennial event brings together five hundred young people from all over the country and the world and enables them to have a greater understanding of the issues affecting them.  It also teachers them to accept each other more readily and to explore means through which they can contribute to national development. The components of this years NAYCONF include the conference, Cultural shows, performances, a carnival, award ceremony, sporting activities and a beauty contest.

The theme for this year is; "Invest in Youth for Sustainable Development."

The sub themes of the conference include a report on the progress made on the review of the national youth policy, youth PRSP II strategies and the MDGs, youth migration, employment creation and sustainable livelihoods, sexual reproductive health, youth and HIV/AIDs, child protection and girls empowerment in nation building. 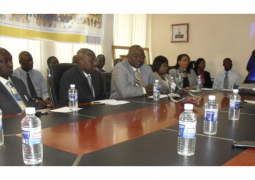 Half of Scorpions abroad in Banjul ahead of Ivory Coast clash