Ahead of the upcoming 2019 Africa Cup of Nations qualifier against Benin, The Gambia Head Coach Sang Ndong has named a 24-man squad.

The Scorpions will face their West African neighbours in the opening Group D clash in Benin on June 11, with kick-off scheduled for 4pm local time (3pm in The Gambia).

The squad predominantly features those that had a successful outing in the recent 2-1 win over Central Africa Republic in a FIFA friendly played in March. Modou Barrow and Mustapha Carayol grabbed the goals to cap off a vibrant team display. Following the victory, the Scorpions rose 13 places in the FIFA rankings and will now look to build on that momentum to make a positive start to the qualifiers. The long campaign ends in November 2018 with the top team in each group and the three best runners-up across all the groups booking a ticket to the 2019 finals to be hosted by AFCON 2017 champions Cameroon. The Gambia is grouped alongside Algeria, Togo as well as opening opponents Benin.

The Gambia are finalising a training camp in Ghana prior to the match, with plans to face the Black Stars in a friendly encounter before departing for Benin.

Previous:
All Is Rosy for Gunjur Football
Next:
Africa Day: It is time to take stock 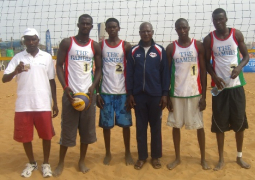