The GFA is set to organise an international friendly game for the senior national team, billed for October 9th 2009, if the words of the Secretary-General of the Gambia Football Association, Jammeh Bojang, is anything to go by.

"We are trying to organise an international friendly game with Guimgamp one of the power houses in the French Division One league in our efforts to keep the senior national team players active," Jammeh told Pointsport in an interview yesterday.

GFA's Secretary-General said FA has contacted as many as 18 players that are currently playing in various professional leagues in Europe. But he couldn't confirm the names of the invited players that have been called up for the friendly game which will take place in France.

The lack of playing time, according to many, has contributed immensely in the significant drop in the FIFA rankings over the last two months which is not going down well with the Gambian football fraternity who are calling on the FA to organise a series of friendly internationals for the senior national team in order to regain our position in the FIFA rankings. 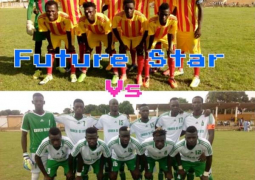