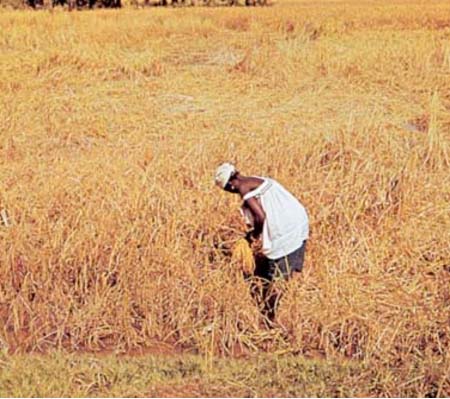 At least 200 hundred kilometres from Basse, the regional capital of Upper River Region (URR), is Sare Alpha.  It is a traditional agrarian village, like many other communities in the region and in The Gambia as a whole.

At the village, the main preoccupation of all: young and old, men and women, strangers and natives, is agriculture, subsistence farming.

Since the formation of the village, at least 200 years ago, they have been alternatively farming on the same piece of land using the same traditional farming methods and with little modification on the materials used.  The harvest has almost been the same year in, year out.

But unlike some other traditional communities, the villagers of Sare Alpha are receptive to change, change for the better.  At the first visit of the officials of the Nema project and at the introduction of the concept of Farmer Field School (FFS), the villager jumped at it.

‘Nema’, is a Mandinka word adopted as the name of an International Fund for Agricultural Development (IFAD)-financed project in The Gambia.  The seven-year project is designed to reduce the poverty of rural women and youth with the objective of increasing income by improving rice and vegetable productivities.

Ousainou Sissaho of Sare Alpha recalled the first time the officials of Nema came to the village:  “When they first came here, they told us that they have a project to help us but the help is not in terms of money or materials.  They said they want to educate us on good and effective ways of agriculture, to increase our production.”

This was four years ago and it was the introduction of FFS in Sare Alpha, the first village to benefit from such project from Nema in URR.

Twenty-five people were selected by the villagers to undergo the FFS training.  Ousainou was recruited and trained to be the training facilitator.

The Sare Alpha farmer field school is mainly based on rice cultivation.  Through experiment and practical demonstration at the field school, the farmers learnt appropriate and best practices in rice seed selection, sowing, spacing, weeding, and fertilizer and pesticides application.

The 25 farmer-students of the field school meet once-a-week and they observe and compare two plots of rice fields over the course of an entire cropping season.  One plot follows local conventional methods while the other is used to experiment with what could be considered ‘best practices’ in rice cultivation.

Ousainou, the facilitator, said they started the training at the field school even before cultivation commence; it starts at the clearing of land for rice cultivation.  At the commencement of the rainy season, the farmers are shown the best method of sowing rice.

At Sare Alpha village, the rice farmers, mainly women, used to do the traditional way of sowing: broadcasting, i.e. sprinkling rice on the surface of the land and later plough the land it by hand or tractor.

“That is not the best way of sowing rice,” Ousainou said.  “The proper way is to use a seeder, the same local seeder that is used in sowing groundnut or coos; the same seeder can be used to sow rice as well.  With the seeder, rice can be sown in lines with an interval of 30cm between the lines.”

The students of the field school start to follow the progress of the rice right from sowing.  They know the right weekly measurement for rice as it continues to grow.  They can also observe to know what happen and what to do should the rice leaves start to turn yellowish or whitest.

The farmers also know how and when to properly apply herbicide to a rice field.

The field school facilitator said the farmers are shown how to measure and mix herbicide and the clothes to wear when applying it on the land.

“They [the farmers] now know that the best way to apply any chemical on a farmland is to stand and give your back to the direction of the wind so that the wind will not blow the chemical back to you,” Ousainou said.

Just like herbicide, the farmers are also shown how and when to apply fertiliser and the type of fertiliser to apply on a rice field.

According to Ousainou, the first type of fertiliser to apply on rice should be compound fertiliser and that should be after two to three weeks.  Then after a month, when the rice is about to start seeding, you can apply urea on it; urea helps to make the rice seed plenty.

“We have also experiment the one where you put the two fertilisers, compound and urea, and the one where you only put urea.  The one without urea does not produce plenty rice compared to the one with urea.  Compound fertiliser just make the rice to grow big and fast but to make it to seed more that is the job of urea.”

“At Sare Alpha here, the farmers now work less on the rice field and harvest more,” Ousainou said.  “Those who use to have two bags of rice now have four to five bags.  There are people in this village who now harvest up to 50 bags of rice in one season.”

Ousainou is not only a facilitator but he is also one of the great male rice farmers in Sare Alpha.  He now cultivates two hectares of rice field when he initially used to cultivate just one hectare.

He was discouraged and about to stop the rice farming to concentrate on his groundnut farm because the drudgery and the backbreaking of the cultivation did not commensurate with the harvest from the land.

“After all the work on the farm, when I cultivate I don’t even eat my rice for two months or sometimes two months at most,” he said.

After undergoing the training at the field school, instead of quitting rice farming, Ousainou increased his land to two hectares.

“With the knowledge I have now, I work less on the field though I have increased the land by double,” he said.  “I have a big family, thank God.  I used to buy four bags of rice every month but now I just take rice from the store and the women pound it.  Now I can go up to seven months eating my own rice.”

Ousainou and his students of the farmer field school have similar stories.

Jariatou Cham, one of the students, said: “We used to use our physical power on our farms; no matter how big your farm is you have to weed it by hand because the way we used to sow rice, you cannot used a weeding machine there.”

“We now use the little knowledge gained from the field school on our farms and our harvest has increased and the work has decreased.”

Jariatou said she used to cultivate about half-a-hectare of rice field and even after her training at the field school, she maintain the size of land.

Just like Jariatou, Amie Binta Damba said she used to spend the whole day at the farm, by the time she comes home it is usually magrib prayer, the sunset prayer.

“But now when I go to the farm, I come back home early to take care of my other household works,” she said.

Another farmer field school student, Jainaba Chillo Damba, said:  “Now I can go to faro, come back to prepare my children to school.”

Her two children are in grades 7 and 8 and both in the afternoon shift.   She can now go to her rice field in the morning, come back and prepare lunch so that her children could eat before going to school.

The knowledge gained from the farmer field school in Sare Alpha is being multiplied.  Each of the 25 people trained also have another group of 25 that they are training both within and outside Sare Alpha.

But for Ousainou, the facilitator of the field school, the benefits of field school are just beyond increment in rice output or reduction in labour usage on the farm.

“The benefit of the field school is immense.  Look at it this way, people who do not know anything now know something and are also teaching others to benefit from the knowledge.  I think that is the biggest benefit.”