Sanyang and Toronto drops in play-off

Despite an injury scare at the weekend, Thierry Henry remained in the lineup for the Red Bulls, but was restricted to the first half. Danleigh Borman and Seth Stammler replaced Roy Miller and Rafa Marquez, who were away on international duty, according to goal.com.

The game opened with Toronto FC controlling most of the play in the middle third. Despite the early possession, the visitors were unable to make the Red Bulls pay.

The Red Bulls blew the game open in the 23rd minute with the only goal through Estonian Joel Lindpere.

Sanna Nyassi and Seattle Sounders will visit Chivas USA to meet their western conference opponents at the Home Depot Center. 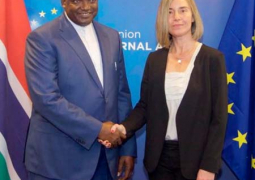