As part of its corporate social responsibility by reaching out to the poor and needy, Qcell the newest entrant to the Gambian telecom industry over the weekend held another fast breaking for residents of Banjulinding, Kombo North, where they distributed parcel of items, including food, sim cards, T shirt, and some bags of sugar to Muslim residents of the area as part of their Ramadan gift.

Speaking at the gathering, the Imam of Banjulding Central Mosque, Alagie Yahya Bah prayed for the success of the new company.

He cited certain version of the Holy Quran, which he said, reads that "helping somebody to break his or her fast in the holy month of Ramadan will be rewarded by Allah in abundance."

Imam Bah commended Qcell for reaching out to the poor and needy in this month of forgiveness, saying that they would continue to pray for the company.

He added that seeking prayers from elders is a step in the right direction.

For his part, Mr. Tombong Saidy, the Managing Director of AMRA and Qcell Media Consultant, told the gathering that Qcell is a Gambian-owned company with the objectives of promoting Gambian services and creating employment opportunities.

Mr. Saidy also noted that the package is for Gambians to break their fast for the sake of Ramadan, adding that it goes with lots of surprises.

According to Mr. Saidy, the ration behind the largesse is to seek blessing from religious leaders, noting that with their prayers, Allah will create an enabling environment for the business to flourish.

He further stated that the Qcell fast breaking package will cover 25 mosques in the Greater Banjul Areas. Mr. Alieu Jah, a cousin to Muhammed Jah, the Managing Director of Qcell also made similar sentiments regarding the fast breaking. 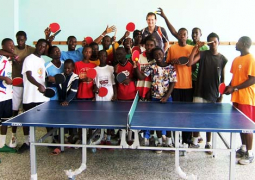