Mr. Saine who is currently standing trial at the Kanifing Magistrates' Court on a charge of "false publication and broadcasting" was yesterday summoned again to the police headquarters in where he made a statement in this connection. He was later asked to go and bring his documents, namely, National Identity Card, Birth Certificate, Voters Card and his recent Passport.


According to Mr. Saine, he was also asked to produce documents of his father, who owned No: in , which he did to substantiate his statement.

He was also questioned of an article published in the Point Newspaper on 30th January 2009 captioned "Neneh Macdouall-Gaye is Gambia's Ambassador to US, As Three Diplomats Recalled".

According to the police the said publication was false, and he was subsequently cautioned and again charged with the alleged offence of "false publication and broadcasting".

It could be recalled that Mr. Saine was last Monday called for questioning by the police in connection with a story carried by his paper regarding an arrested Gambian diplomat. On the fateful day, he spent there some eight hours and was charged and released on a police bail in the sum of D50, 000 and asked to report the following day. And on Wednesday 4th he was arraigned at the Kanifing Magistrates' Court on a charge of "false publication". That matter comes up on the 19th February 2009.

Previous:
Another British National in Court
Next:
Journalists Must Fight Stigma 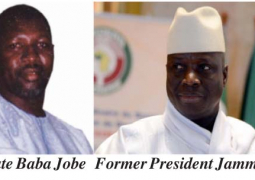