Abdoulie Jawo scored the only goal of the game for Pencha Bi FC in the 16th minute to give his side their first victory of the tournament organised by Mustapha Drammeh, the program officer for Serrekunda East Sports Development Organisation and sponsored by Omar Koroma, Gambian international player and former striker.

On the same day at the Serrekunda Lower Basic School football field in the 5 pm encounter, Jokor FC played Safira FC to a goal less draw in a keenly and well-contested encounter.

Meanwhile, Cambel Town FC lock horns with S. V. Laar FC today, Wednesday 1st September 2010 in the 3pm kick-off while Nguma FC will battle it out with Safira FC in the 5pm encounter at the football field. 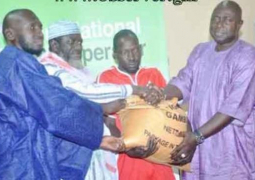