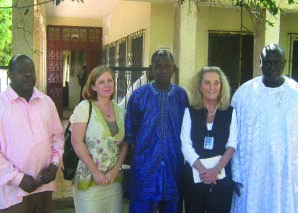 The new US ambassador to The Gambia Pamela Ann White Friday paid a courtesy call on the management of The Point newspaper along Garba Jahumpa Road in Bakau New Town.

Ambassador White was received on arrival by the Managing Director and co-publisher of the paper, Alhaji Pap Saine, the General Manager, Phillip Kotey, Editor-in-Chief Baboucarr Senghore, and Deputy Editor-in-Chief (1) Nfamara Jawneh, at The Point as part of a familiarisation tour of media houses in the country.

After a thirty-minute close door meeting with the management of the newspaper, Ambassador White told this reporter that she was at The Point to familiarize herself with its management. "We had a frank and honest conversation," the US diplomat told this reporter.

According to Ambassador White, she was better informed about how the media operates in The Gambia. "I will visit all the media houses within two to three weeks," she said, adding that the Gambian media is operating nicely.

A journalist herself, the chief US diplomat is of the conviction that people need the right to speak, and that it can be done in many different ways in which one can express feelings about their country.

Noting that she was happy to be in The Gambia, Ambassador White underscored the US Embassy's resolve to help the Gambia media.

Alhaji Pap Saine described the meeting with the US ambassador as fruitful, saying that he was happy to receive her.

According to The Point's boss, his discussion with the US diplomat centred on the paper's operations, promotion of women and girls rights amongst others.

"Our discussion also centred on the support we get from the public, which has always been fantastic, our contributions to promoting women and girls rights, and the paper's work to satisfy the public in a bid to strengthen democracy," Saine added.

He also underscored the paper's commitment in fostering good relations between the US and The Gambia government's and their peoples.

Mr. Saine solicited the support of the US government and the international community in training for journalists and capacity building for media houses in The Gambia.

Our economy needs some urgent amends