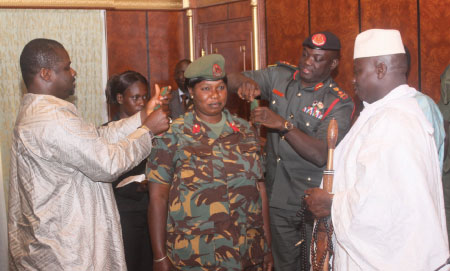 President Yahya Jammeh Wednesday presided over the swearing in of Ousman Jammeh, the newly-appointed Secretary General and Head of the Civil Service.

Secretary General Jammeh, who took the oaths of office, secrecy and allegiance, was Tuesday appointed Secretary General, a position he previously held, replacing Ebrima O. Camara, who was deployed to the Gambian embassy in as deputy head of mission.

Speaking at the swearing in ceremony, President Jammeh thanked Ousman Jammeh for accepting what he said was yet another daunting challenge, noting that the position of the Secretary General is the engine of the Government.

“The position of Secretary General needs somebody who is approachable, because we want to make the civil service as convenient as possible,” he said, adding that there will be a vigorous training for civil servants who have very good track records.

According to him, the Office of the Secretary General is a very important office – it is the nerve centre of the government.

“If it is a vessel, it is the engine room and, God forbid, if everything goes wrong there, the whole entire government machinery will come a halt,” he said, adding further that the wealth of experience of the new Secretary General in many sectors serves as an added advantage to his work.

While underscoring the need for training in the civil service, President Jammeh said that his government will focus more on training.

“So in as much as we want to train young Gambians to any level outside of the system, we want to make sure that we give priority to those whose performance we already know,” he said.

Speaking shortly after taking the oaths, Secretary General Jammeh thanked President Jammeh for his trust and confidence in re-appointing him to what he called a very tough and challenging position.

While promising to do his utmost with sincerity, honesty, dedication and loyalty to the President, the Government of the and its people, the new Secretary General solicited the support of the cabinet and the civil service in general, knowing fully well that their success as a Government lies in their collective efforts based on team work.

Meanwhile, in a separate but related development, President Jammeh, who is also the commander-in-chief of the armed forces on the same day presided over the decoration and swearing in of the ’s first female Brigadier General and another senior military officer at State House.

Speaking at the ceremony, President Jammeh said promotion for armed forces members is not based on gender, but on merit, adding that the era of eye service is now a thing of the past within the forces.

While urging the newly-promoted officers to be good role models, the Gambian leader reiterated his zero tolerance policy on drug trafficking and corruption, especially in the army, noting that they will not be tolerated in whatever form.

“If you choose to be drug traffickers, leave the army because at GAF we will not compromise on drug trafficking in the country much more within GAF circles,” he warned.

According to him, begging by members of GAF should be discouraged within the system. “Be content with what the Almighty Allah gives you,” he said.

The chief of defense staff Lt. General Masanneh Kinteh said this was the first time they have witnessed the decoration of a female officer to the rank of Brigadier General in the person of Ramatoulie DK Sanneh.

According to him, the promotion of Brigadier General Ramatoulie DK Sanneh would serve as a source of inspiration for the young women already serving in the armed forces, and for the young ones outside.

CDS Kinteh thanked President Jammeh on behalf of all the service chiefs, officers, men and women of the entire armed forces for not only making the promotions, but also taking time of his busy schedule to preside at the decoration and swearing in ceremony for the newly-promoted officers.

“These categories of ranks were carefully selected by President Jammeh based on the need for the systematic growth and transformation of the armed forces,” Lt. Gen. Kinteh said.

Other speaker at the ceremony included the ministers of Youth and Sports, Fisheries, Water Resources and National Assembly Matters, Sheriff Gomez and Lamin Kaba Bajo respectively, who called on the newly promoted officers to live up to expectations.