The trial involving UDP militant Solo Sandeng, who was charged with giving false information to a public servant, yesterday continued at the Brikama Magistrates’ Court before Magistrate AA Jagne.

The case continued with the testimony of the second prosecution witness (PW2), Muhammed Jaiteh.

When the case was announced, the accused told the court that he had spoken to his Lawyer, Ousainou Darboe, who told him that he was on his way, and he could not proceed without his counsel.

In response, the prosecuting officer told the court that the case was set for hearing; he had a witness, and was ready to proceed.

In her short ruling, the trial magistrate told the court that she has taken into consideration that the accused has a right to counsel, but the counsel did not write to the court as to why he was not in court.

She, therefore, allowed the prosecution to proceed.

In his testimony, Muhammed Jaiteh told the court that he is a businessman from Tanji, adding that he could recognize the accused person.

He recalled that on 18 November 2013, one Sunkaru Jassey came to him with a permit from the Tujereng Police Station.

Jaiteh said he asked him who issued him the permit, and he said he did not know.

He said he asked Jassey because the permit had a stamp, but the stamp did not contain the telephone number of the person who issued the permit.

PW2 further stated that Jassey asked him if he could pay the rental fee for use of the hall to him, but he told him he could not take the money because the permit had no telephone number on the stamp.

“The permits I used to receive from people used to contain numbers of the person who issued it; in case of any problems that person could be contacted,” said Mr Jaiteh.

He said there were people who later came and asked why he said the permit was invalid, and he told them that because there was no number on the stamp, but if they have the number of the one who issued they could contact him.

He said the accused person was one of those who came with the permit.

Jaiteh said he told them that since the village had a head, who is the alkalo, there was a need to inform him.

He said he insisted and they went there, but the alkalo was not there and they met his son, Dembo Bojang.

Jaiteh further adduced that he explained everything to the alkalo’s son, and he asked him if they had a permit and where they got it from.

He said he told him that they had a permit from Tujereng Police Station, adding that he was asked by the alkalo’s son what the permit was for and he told him what was written on it was “social gathering and musical entertainment”.

Mr Jaiteh further adduced that they paid him D1,300 and he asked them whose name should be written on the permit, and they said Ebrima Sandeng.

He said before he gave them the receipt, he waited until the accused person came, and he told him that they should make sure they stage it in peace without any problems.

The accused promised him that they would do it in peace, he said.

He said after the meeting he locked the hall, and they packed their things and left in peace.

He said he was there and there was music, as they were playing cassettes and dancing.

He said on 4 December 2013, Tujereng police arrested Jassey and five others and brought them to his work place, and said they wanted to have the permit that was given to him, and he gave it to them.

He said he was then asked to go with them to the station, where he gave his statement, adding that he was later called at the NIA office on 8 December 2013, and explained the same thing he explained to the court.

On 9 December 2013, he continued, he was called again at Tanji NIA and was asked if Ousainou Darboe was at the meeting, and he told them he was there.

He said he was further asked what he heard Ousainou Darboe saying, and told them that he had him saying that he did not come for the meeting because this was not a meeting, and meeting would be one on 14 and 15 December 2013, at the Buffer Zone and Brikama respectively.

He said on the 11 December 2013, he was again called at the NIA office in Banjul and was asked if Ousainou Darboe came there and what he said, he said he told them that he said he is not here for a meeting, because this was not a meeting and that the meeting would be held on 14 and 15 December at the Buffer Zone and Brikama.

He said he was asked by the NIA how much he was paid, and he told them that D500 for the hall and D500 for the chairs and D300 for Cashpower.

Jaiteh added that he was also asked were the kanyeleng that played there came from, and he said he did not know.

The particulars of offence alleged that the accused, Ebrima Solo Sandeng, on 27 November 2013 wrote an application for a permit to the Tujereng Police Station to stage a social gathering with musical entertainment at the Tanji Youth Centre, when he was staging a political rally, knowing or having believed it to be false. 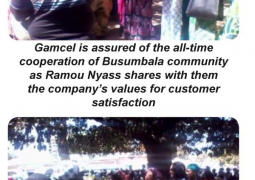