The leader of the main opposition United Democratic Party, lawyer Ousaniou Darboe, has said the popular uprising sweeping the Arab world is a lesson to all "dictators" around the world, that they have to follow democratic norms.

Darboe, who spoke in an exclusive interview with our reporter yesterday, said the only way to stop such types of uprising and protests is through democratic reforms.

The uprisings, the latest of which is in Libya, are a series of revolts that have raced like a wild fire across the Arab world since December, toppling the long-time rulers of Tunisia and Egypt, and threatening entrenched dynasties from Bahrain to Yemen.

"No one would have  thought that Gaddafi, a man who considered himself as Africa's strongman would have found himself in this situation and I think that is a lesson for leaders in and other parts of the world, that they should do things according to the constitution which is the supreme law of any country," he stated.

According to the UDP leader, if leaders fail to do so, it will come a time when they can no longer contain the population and, if this happens, those who used to dance and clap for them will be the very ones who will turn against them.

In his view, the demonstrations and uprisings in the Arab world are evidence of the fact that leaders can only suppress their people for a time, and also show that power belongs to the people.

Darboe is of the firm conviction that the people have their legitimate rights to express their feelings, adding that the protests have resulted into violence because the governments decided to use force to suppress the demonstrations.

"If they invited them to dialogue or they let them protest peacefully, it would not have resulted to violence. They think the way to deal with protesters is the use of violence, and that is why the protesters also decided to resist force," the UDP leader further stated.

More on Darboe's interview will come in our Monday edition. 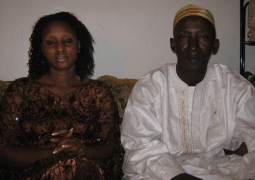