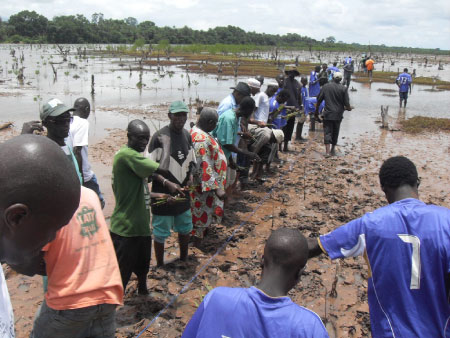 At a massive planting exercise over the weekend at Bintang Bolong, Kalagi Bridge in the West Coast Region, some 15,000 mangroves seedlings were planted.

The exercise that brought more than three hundred volunteers was geared towards implementing the National Agricultural Research Institutes, Africa Union contribution to the revival of the Agricultural Productivity (CRAP) in post-conflict zones and neighborhoods.

The purpose of the convergence at Brumang Bridge in Kalagi was to implement activity three of the AU-CRAP in the Restoration of Mangrove Ecosystem and Rehabilitation of degraded land.

Speaking at the exercise, Ansumana Jarju, AU-CRAP Science and Technology focal point, at NARI, said it is important to plant the mangroves as it will benefit oyster collection, housing, and fishing.

He added that the purpose of the exercise was to enrich the ecosystem to ensure the country have a population that will serve the community in diverse function and path ways that the livelihood of the people in terms of shelter, housing, and the fishing sector.

Mr Jarju added that this is the activity research grant for the first war zones in the country while in The Gambia the project is intervening in the West Coast Region.

According to Jarju, there are other eight intervention areas of the mangrove restoration programmes in the said region.

Mr Jarju also told the participants that this exercise is an annual activity which will be a continued process for the next three years.

He also expressed appreciation about the level of the commitment of the youth during the mangroves planting, saying this has shown that the youth of today are very much concerned with the restoration of the country’s environment.

He emphasised that the mangrove restoration programme is one of the activity three of the African Union’s contribution to the revival of the agricultural activity.

The Gambia, he said, is indirectly affected in the sense that The Gambia is a close neighbour to Cassamance.

It is within this trend that the president of The Gambia subscribes to this initiative for the government to partner with this project.

For his part, the Regional Forestry Officer, Ousainou Cham, said he was impressed with the participation of the youth during the exercise.

He said their demonstration has shown that the youth of today are the cream of the society and are ready for the restoration of the country’s lost forest cover.

It is the mandate of the forestry department policy to protect all mangroves area in the country, he said.

The president of KOMFORA thanked the youth for their willingness in complementing the government’s effort in the restoration of the country’s lost forest cover.

Mr Janko reaffirmed his association’s continued commitment in partnering for the protection and preservation of the environment.