In his defence testimony, Mboge told the court that he lives in Brikama and is a legal practitioner, adding that the charges levelled against him “are all false”.

“I prepared exhibit A, under the authority of the fourth prosecution witness, Saikou Barrow, and his father, Alhagie Barrow,” Lawyer Mboge told the court in his defence.

He further said that the fourth prosecution witness went to his office in March 2010, and produced a copy of the judgment of his father and another copy of a judgment against his father, which was reported in the Gambia Law Report.

He added that PW4 told him that the judgment that was against his father was false, adding that after looking at the judgment and listening to him, he advised PW4 that he could not resolve the matter without going to court.

Mboge said that in August 2010, he received a phone call from the Attorney General and Minister of Justice, Edward Gomez, who said that he wanted him to see him.

“I went to answer to the call of the Attorney General, because I have respect for him as a Minister,” he added.

“Upon my arrival in Edu Gomez’s office, I saw PW4 and his father sitting and Gomez told me that the case was referred to him (Gomez) for legal advice, and he trusted me that was why he wanted me to assist PW4 and his father for them to get their property,” he told the court.

“I told Minister Gomez that I would accept it on two conditions, that is, if they would adhere to my advice and if they can pay me,” Mboge further told the court in his defence.

Lawyer Mboge told the court that on 27 August 2010, Saikou and his father came to his office and he told them the procedure of how to recover their property.

“I told them that they could not get back the property without going to court. Saikou and his father accepted what I told them in my office, and they paid me my legal fees. 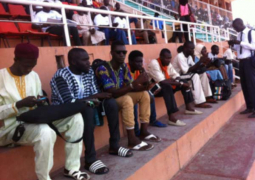