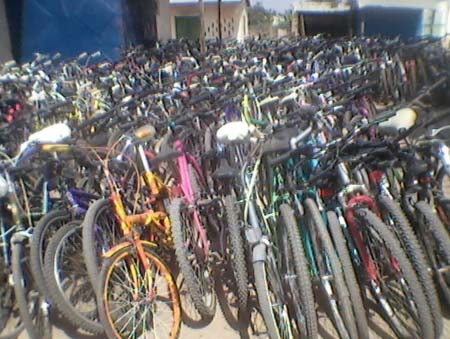 Speaking at the presentation ceremony held at Gunjur, Jolly Riders

He added that since its establishment in 2006, they have

been working with primary and secondary schools in the country, pointing out that the foundation had donated over thirteen thousand

bicycles to schools across the length and breadth of the country.

Touray underscored his organisation’s continued support to Gambian schools, while urging the beneficiaries to make best use of the donated bicycles.

The Governor of West Coast Region, Alh Lamin Sanneh, commended the Government of The Gambia under President Yahya Jammeh for taking education to the doorsteps of Gambians.

He thanked the foundation for their tireless contribution towards the education sector, adding that the donated bicycles would make transportation easy for students who travel from far distance, as well as to help them to be in school on time.

Deputising for the permanent secretary at the Ministry of Basic and Secondary Education, Ebrima Sorry Ceesay, described the donation as

The director of learning and planning at Jolly Riders, Saidu Gbla, thanked all stakeholders for their cooperation and support to the project, adding that the foundation had also trained bike mechanics in each region to ensure the sustainability of the donated bicycles.

The Ward Councillor for Gunjur, Karamo Bojang, and the representative of the Sefo of the district, Omar Jammeh, both commended Jolly Riders for their tremendous efforts at supporting the needy students, sayingit has been boosting the transportation need of many students trekking over 1km.