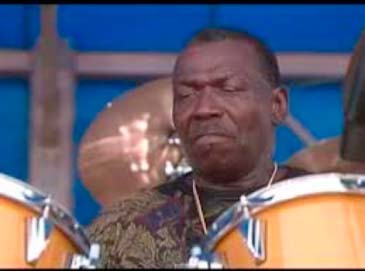 The sound of the drum can be heard from far away and it is echoing with songs of freedom as we welcome our new President His Excellency Adama Barrow.

In our last edition, we talked a little about the drum and its use and importance in jazz. We also dilated on the structure of the drum and the various components that make up the drum set. The drum has always been an integral part of African culture and has served as a medium of communication for people on the continent and for Africans the world over. It is also closely associated with jazz music, and together with the piano, they represent the fundamental instruments on which the music was developed. We have traced how the evolution of jazz took shape from the Marching Bands, to Big Bands playing swing, to mainstream jazz and then bebop, post bebop and everything else that came after. What is important to note here however, is that jazz music originated in the United States in the 19th century, through the confrontation of blacks with European music. Jazz differs from European music in that it has a special relationship to time which is defined as “Swing”. There have been many attempts to define jazz, but none of it is complete or satisfactory because of its evolving nature.

In European classical music, the elements of interpretation, ornamentation and accompaniment, are at times left to the discretion of the performer whose primary role is to play a composition as it was written. European classical music is said to be the composer’s medium, while in jazz, the skilled performer will interpret a time in a very individual way, never playing the same composition exactly the same way twice, all depending on his or her mood, experience, interaction with other musicians and even the audience. The early structures of blues offer repetitive call and response patterns which is a common element in African American oral tradition and in New Orleans and Dixieland jazz, performers often took turns playing the melody while others improvise counter-melodies. By the time of Swing and the Big Band era, there was reliance on arranged music that was either written or learned by ear and memorized, as it was common place that many early jazz performers could not read music.

Our feature this week is about someone whose early interest in jazz was influenced by Marching Bands he watched as a child and became fascinated by the drummers. His birth name is Elvin Ray Jones. He was born in Pontiac, Michigan on September 9th 1927. He is an American drummer of the post-bop era who became fascinated with drums at the age of two, and following this early passion, he joined his High School Marching Band where he developed the rudiments of drumming. After leaving high school, he joined the U.S. Army in 1946, was discharged in 1949 and returned home broke and unemployed. He then borrowed thirty five dollars from his sister and bought his first drum set. He began his professional career in 1949 playing at a local club in Detroit called the Grand River Street Club. In 1955, he auditioned for the Benny Goodman Band, but was not successful, so he decided to move to New York where there were more opportunities for jazz sidemen to find work. While in New York, he joined Charles Mingus band and later released a record called J for Jazz. In 1960, Jones joined the classic John Coltrane Quartet which also included bassist Jimmy Garrison and pianist McCoy Tyner. This band is widely considered to have redefined “Swing” (i.e. the rhythmic feel of jazz) in as much the same way that Louis Armstrong and Charlie Parker did during the early stages of jazz.

This article is in memory of the late Malando Gassama drummer of the former Super Eagles Band who also played with the Swedish band ABBA and Jazz great Al Jareau of the United States.