In yet another tough-talking statement, President Yahya Jammeh has stressed that there is no place for extremist ideology in the country.

Jammeh, who was speaking Friday during the presentation of prizes to winners of the female category of the first-ever Quranic memorization competition sponsored by him and held at State House grounds, condemned the use of Islam by some people as a cover to commit crimes against innocent Muslims.

"As Muslims, we must have love for each other," he said, while emphasizing that he will not allow any person or group of people to come to the country in the name of Islam only to have a different mission, which is not for the peace and stability of the country.

He also warned people not to lodge such kind of people. "Don't lodge any person or group of people whose intention will be to make The unstable, because there is no place for extremist ideology in this country," Jammeh said, while condemning the use of Islam by some people as a cover to commit crimes against innocent Muslims.

"In some Muslim countries, Muslims are afraid to attend congregational prayers for fear of attacks by their own citizens, and these people who do such attacks are not Muslims but they hide behind Islam for their activities," he stated.

He further called on heads of madrassas and landlords not to allow their institutions or compounds to be used for extremist ideologies.

The females competition, which followed that of the males category, in which Soriba Dibbasey of in emerged as the first winner, brought together 49 female students from different Islamic Arabic schools from across the country.

President Jammeh commended the three winners for their efforts, noting that all those that participated in the competition are winners.

According to the Gambian leader, the reason for sponsoring the competition was to show to the whole world that The Gambia needs nobody to come and educate its people in Quran, but a way of showing that we can educate ourselves in Quran without outside intervention.

"Where there is competition, there must be a winner," President Jammeh said, while calling on the Muslim Ummah in the country to love each other in the name of Islam.

Dr. Mariam Sarr Ceesay, Minister of High Education, underscored the importance of the competition, while commending President Jammeh for his efforts in the propagation of Islam in the country.

Sheikh Ebrima Jarjue, a member of the Quranic competition committee, commended President Jammeh for his vision and foresight in the promotion of Islam. According to him, the female category of the competition performed more than the boys' category.

"When the final results were compiled, there were no brackets among the female winners," he said, adding that the competition was conducted under rules and guidelines, with particular attention to creating a conducive environment for the promotion of Quranic memorization in The .

Imam Abdoulie Fatty of State House Mosque praised the Almighty Allah for giving President Jammeh what he called the courage to sponsor the competition for the young future leaders of the country.

"The committee has done its efforts without favour, because none of the committee member's daughter was among the winners and this shows how fair the competition went," Imam Fatty told the gathering.

"Anybody who gives respect to the Holy Quran, the Muslim Ummah in The will follow you and for President Jammeh, we will follow him because he respects the Islamic religion," Imam Fatty added.

The ceremony was attended by the First Lady Madam Zainab Yahya Jammeh, cabinet ministers, deputy Speaker of the National Assembly, service chiefs, National Assembly Members and religious leaders, among others.

The second winner, Mariatou Yahya Darboe, gave the vote of thanks on behalf of her fellow participants.

Much to do about our ferry services 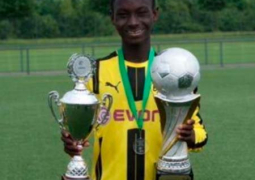