As he distributes Sugar to Muslims

The President Dr. Alhagie Yahya Jammeh yesterday distributed 18,000 bags of sugar as Ramadan gift to the administrative regions and municipalities in the country. Other beneficiaries included the Supreme Islamic Council, the departments of Interior and Defense. The Gambian leader used the occasion to criticize unscrupulous businessmen as well as butchers who used the Ramadan period to increase the price of commodities. President Jammeh gave one week ultimatum to local authorities to ensure that the price of meat is reduced. President Jammeh said from today , a kilo of steak should be sold at 80 dalasi while meat and bone pegged at 60 dalasi. The Gambian leader emphasized that local authorities are authorized to deal with defaulters. He warned that any local authority who fail to ensure that meat sold in his region reflect these prices will be dealt with accordingly. The President also talked about the issue of landlords who are in the habit of harboring criminals and unscrupulous people. He warned that such acts must stop or else the culprits will face the full force of the law. Dr. Jammeh again called on parents to inculcate discipline and sense of responsibility into the children. He said parents as well as religious leaders need to take up their responsibilities especially towards the young. President Jammeh told the gathering that the Ramadan gifts must be distributed to the people especially those who need it most, irrespective of political affiliation. The President gave 1,500 bags of sugar each to the North Bank, , , the departments of interior and defense, 3000 bags each to KMC and Western region, 2000 bags to Central River Region and 500 bags to the Supreme Islamic Council. Speaking on the occasion the Secretary of State for Fisheries and Water Resources, Yankuba Touray, described the annual goodwill gesture to the Muslim community as a laudable one. The Secretary of State for Basic and Secondary Education, Fatou Lamin Faye expressed similar sentiments and thanked President Jammeh on behalf of Gambian women. She also urged women, to continue rally behind the president, who she said has their interest at heart. 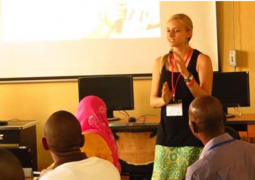