With the demise of Dawda aka D Faal Wednesday, The Gambia has lost a good educationist and passionate historian who dedicated his life to teaching young Gambians the history of their great country. His book The History of The Gambia since AD1000 first published in 1992, became the first school text dedicated to the entire National History syllabus of  the leaving certificate exams. It remains the standard reference for schools on aspects of Gambian history. D Faal also excelled as a teacher of history for over 40  years at Armitage and, lately, in .

He qualified from Yundum Teachers's College in 1967, taught at and later went to study history at the of in , where he bagged a BA Honours in History and a Diploma in Education in 1976. For many years in the late 1970s and early 1980s, he was history master at Armitage. He was among the first corps of  Gambian history teachers in our High Schools after , and has helped to inculcate the love of history and by extension, country, into hundreds of Gambians.

The last time he came to see me, he told me that in his college days, he was a hothead Pan-Africanist, a supporter of the late Kwame Ture aka Stockley Carmichael (1942-1998), of the Black Panthers fame. D Faal was instrumental in inviting Stockley to in 1969, accompanied by his winsome wife and ace singer, Mariam Makebba.

His inchoate Pan-Africanism began to take shape in , where he studied briefly in the 1960s. He was one of many young Gambians airlifted to Nkrumah's to study under Ghanaian scholarship arranged by Nkrumah's friend IM Garba Jahumpa. However, he narrated to me recently that he left after finishing High School because he was not interested in the indoctrination that the foreign students were coaxed into at Nkrumah's Winneba Ideological Institute under the principalship of the fiery Nigerian Marxist S. Ikoku. Yet, he remained a fervent Nkrumahist and read his works with inimitable dedication.

In fact, D Faal was a voracious reader. He read great historians of our time such as Martin Klein, Phillip Curtin, Adu Boahen, Arnold Toynbee and the Greek Greats such as Thucididyes and Herodutus, the Father of history.

He was a simple man, full of passion for teaching and developing young minds. Yet, his students will remember that he was an uncompromising disciplinarian especially when it comes to handing in assignments. I enjoyed talking to him, for he had a wide mind that was able to add value to any topic under the sun.

I pray for his soul to rest in peace. 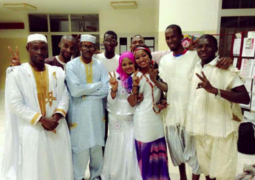