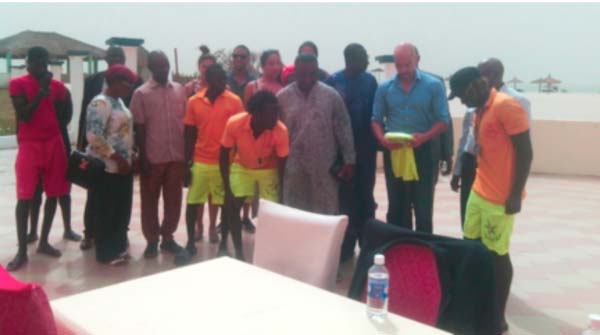 Gambians based in Norway recently donated some life shorts to Sand Beach Hotel, at a ceremony held at the hotel ground.

Speaking after the handing-over of the materials, Abdoulie Hydara, director general of Gambia Tourism Board, thanked the donor, Mr Barry, and his children, saying the donation was very important and timely.

Director Hydara said most of the time when drowning happened the quickest result is to be able to rescue and if that rescue was not done on time it would result to death.

“We now have a solution to our problem,” he said, adding that they want to encourage people to work with them by providing training to the users of those tools.

He said they had been trying to sensitise the people who use the beaches and those who use the swimming pools.

He urged all the pool attendants to ensure they provide the tools to people using the facilities and make ensure they use them.

Kefi Barry, head of the family that donated the materials, said they were very proud to make a donation as part of their contribution to national development.

Adama Njie, director of Marketing at Gambia Tourism Board, said he was very touched by the gesture, adding that it was not only for GTBoard but also for the entire country.

Every Gambian both within and outside should emulate the gesture, he said.

Momodou Bah, director of Quality and Product Development, said the Gambia Tourism Board being the custodian of the TDA, safety is their paramount concern, adding that GTBoard is working with the Gambia Fire Services to protect lives.

“We have witnessed unprecedented drowning over the past two years, which is attributed to different things,” he said.