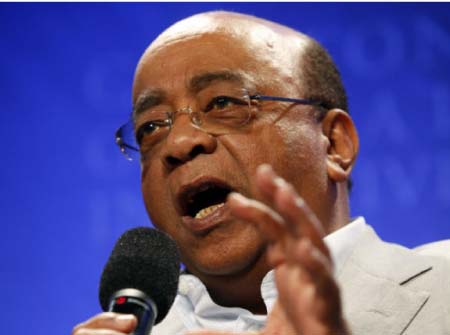 The Gambia has been ranked 23rd with a score of 51.6 in the 2014 Mo Ibrahim Index of African Governance (IIAG).

The 2014 Ibrahim Index of African Governance, launched yesterday 29 September, shows that between 2009 and 2013 overall governance improved on the African continent.

However, over the past ten years, the main drivers of this overall positive trend have changed.

“The results of the 2014 IIAG challenge our perceptions about the state of African governance. Africa is progressing but the story is complex and doesn’t fit the stereotypes. Even if the overall picture looks good, we must all remain vigilant and not get complacent,” said Mo Ibrahim, Chair of the Mo Ibrahim Foundation.

At the country level, the 2014 IIAG highlights the potential of governance underperformers while revealing the weaknesses of current frontrunners.

Countries in the bottom half of the rankings register the largest improvements over the past five years.

Côte d’Ivoire, Guinea, Niger and Zimbabwe have changed course since 2009 from negative trajectories to become the biggest improvers on the continent. This progress has been driven in large part by gains in Participation & Human Rights.

Meanwhile, the historically strong performers, Mauritius, Cabo Verde, Botswana, South Africa and Seychelles, have shown some deterioration in at least one category over the past five years. Notwithstanding that all these countries remain on overall upward trends.

“The 2014 IIAG results show that high ranking countries cannot assume that future achievements will necessarily follow previous accomplishments. More generally, let us make sure that the Africa Rising narrative, that everyone is talking about, truly benefits all African people,” said Jay Naidoo, Board Member of the Mo Ibrahim Foundation.

At category level, the 2014 IIAG also reveals that the main drivers of the overall positive trend in African governance have changed. For the most recent five years, from 2009 to 2013, progress has been jointly driven by Participation & Human Rights and Human Development, whereas the main driver of gains in the previous period (2005-2009) was Sustainable Economic Opportunity, which has stalled in the most recent period.

Progress in the Participation & Human Rights category has gathered momentum, making it the most improved 2014 IIAG category over the last five years (+2.4). While in Rights and Gender the trends are both positive, it is in the area of Participation, particularly Political Participation, where the strongest gains in score have been achieved for this latest period.

“With a growing electorate that has demonstrated a desire to be heard, the results of the 2014 IIAG confirm that Participation & Human Rights is a crucial aspect of governance that governments cannot ignore,” said Mary Robinson, Board Member of the Mo Ibrahim Foundation.

In contrast, after an improvement of +3.4 between 2005 and 2009, the largest of any category in this time period, Sustainable Economic Opportunity has registered the opposite trend over the last five-year period, with a deterioration of -0.2. This is due to a reversal of trends in two of the four sub-categories, Public Management and Business Environment, and a slower pace of improvement in the other two sub-categories, Infrastructure and Rural Sector.

“Perhaps some of the low-hanging fruit of better economic management have been garnered. The challenge grows for the continent to become a fully competitive force in the global market at a time when commodity price trends are becoming less helpful to many countries on the continent,” said Lord Cairns, Board Member of the Mo Ibrahim Foundation.

Meanwhile, the Safety & Rule of Law category continues to expose concerning trends, with 12 countries showing their weakest performance since 2000, in 2013.

Having shown a deterioration of -1.5 between 2005 and 2009, this dimension of governance registers another negative trend in the last five-year period, although to a lesser extent (-0.8).

Safety & Rule of Law is the only category in the 2014 IIAG to have demonstrated two consecutive five-year period deteriorations in the last ten years.

National Security is the only sub-category within Safety & Rule of Law to have shown progress over the past five years (+0.5), driven in large part by Cross-border Tensions, the most improved indicator in the 2014 IIAG. This aspect of improved citizen security is in contrast to the deterioration registered in Personal Safety (-1.1) in the past five years, driven by declines in four of the six underlying indicators.

“Even if overall governance trends are positive, contrasting performance in the 2014 IIAG is of concern. The strength and sustainability of Africa’s future prosperity will be defined by the continent’s commitment to all governance dimensions, including safety, security, and the rule of law,” said Salim Ahmed Salim, Chair of the Ibrahim Prize Committee.

On the other hand, Human Development has remained a consistent improver, showing positive movement of +2.3 since 2009, after a positive trend of +2.2 between 2005 and 2009.

All sub-categories and 41 out of 52 countries have seen an improvement over the past five years, with a quarter of these having improved by more than +5.0 points.

Health is the most improved sub-category within the 2014 IIAG. In the last five years, all of its underlying indicators, which measure issues such as maternal mortality, immunisation and undernourishment, have registered progress. However, this largely positive picture masks the poor performance of some countries, particularly in Welfare.

“The 2014 IIAG underscores the need to focus on building equitable and efficient institutions, such as health systems, accountability mechanisms and statistical offices. Without these, we will not be able to meet the challenges we face – from strengthening the rule of law to managing shocks such as the Ebola virus,” concluded Hadeel Ibrahim, Founding Executive Director of the Mo Ibrahim Foundation.