The bilateral meeting of experts from the Gambia Revenue Authority and their Senegalese counterparts held recently in , is a most welcome development.

We hope that such meetings will continue, so as to further promote re-export trade with and beyond.

However, what is even more essential is the free movement of people and goods between the two sister countries.

Customs officials at the border crossing points should be guided by the wishes and aspirations of the people of the two nations.

People in and The Gambia should be able to move from one country to the other without much delay or any harassment.

It is important to note that, during the meeting, it was agreed that a copy of the memorandum of understanding between Senegal and Mali on the implementation of the ISRT should be made available to the Gambian delegation to serve as a guide in the preparation of a similar MOU between The Gambia and Senegal, and that the said MOU is expected to be finalised within a period of three months.

The beauty about the meeting is that both sides acknowledged the importance of exchanging information to control cross-border smuggling.

This is also a good move, since what goes wrong in either of the countries can have a negative effect on the other.

That meeting was expected to discuss and find solutions to some of the challenges facing citizens of the two countries when traveling to each other's territory.

One thing that is fundamental is that the two countries should respect and follow the agreements to the letter.

It is one thing to sign an agreement and another to implement it. Therefore, the most important thing is the implementation of such bilateral agreements.

s customs administration has promised to act on issues raised at the meeting upon receipt of a written formal notification from the GRA.

We, therefore, challenge the customs authorities in the two countries to always obey the commitments made by their leaders.

Our advice to the customs chiefs is that they should always ensure that they pass down any relevant information to their officers on the ground for effective implementation.

and The Gambia are the same people, divided by the colonial masters.

They inter-marry, and share the same religion, a common culture, common traditions, same tribes and other social values. Thus, it is important that any action taken by either side serves to consolidate ties between the two peoples and states. 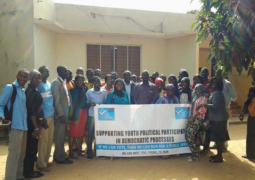