Following a fine imposed on The Gambia resulting in the suspension of its key player during the Gambia/ Algeria game last year, the President of the Gambia Football Association Seedy MB Kinteh has made a strong appeal to fans to comfort themselves and avoid a repeat of the same incident between the two sides. The Scorpions take on Algeria in group 6 of the World and African Cup qualifiers on Saturday.

The Gambia was subject to a financial sanction of USD 10,000.00  by the CAF Disciplinary Board for the unsporting behaviour of  supporters, as well as the offensive behaviour of some of our players, during preliminaries of the 26th African Cup of Nations, Ghana 2008  qualifiers against Algeria played at the Independence Stadium in Bakau.

He said, "This is going to be a watch match for both CAF and FIFA and if the same incident occurs during Saturday's game we have to dance to the tune of the football authorities"

He added that as part of the Sunday's match the Referee will arrive from Mali and his assistants will come from Morocco, Angola and Mali. The Referee Inspector will come from Benin. These officials will start arriving in Banjul on Friday for the game.

The GFA prexy welcomed the return of the players who were facing suspension from CAF describing their presence as a plus to the team in terms of scoring goals .

" I think we need more goals and the teams are ready for the match and will rectify their mistakes from the last games. We expect to see more goals this time around as I know how important the is to us," he pointed. 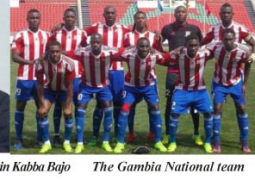 What is next for Gambia as AFCON Qualifiers Approaches?