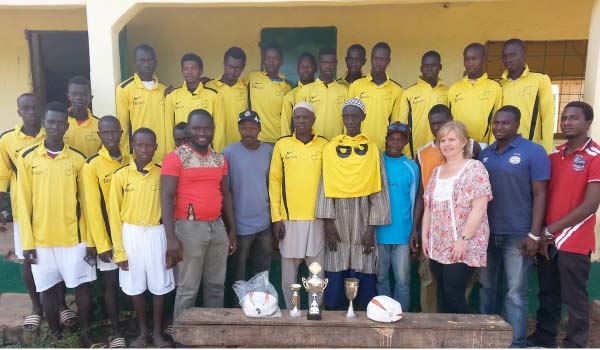 Geke Lagerburg-Schutte, the Dutch founder of 4Gambia, and Amadou Demba, the foundation’s Gambia national coordinator, presented the items to JSDA at a ceremony held at Sittanunku village, Upper Niumi District, on Saturday.

Alkalo of Sittanunku, Ba Nuha Jammeh, expressed gratitude to the donors while welcoming them to the village.

He said as the village head, his priority is the development of the village in all areas; so any help that is coming in that light is always welcomed.

Amadou Demba, national coordinator of 4Gambia, said the foundation is involved with different projects in The Gambia such as education, health and sports as a contribution to making life better for Gambians.

In the area of sports, the foundation had supported at least 25 football academies in The Gambia with different sporting materials, including jerseys, footballs, trophies and football boots.

Mr Demba said by the time they received the request for support of sporting materials from JSDA, they had already given the ones at hand to teams who were on their waiting list, and it was not even enough.

But they decided to go the extra mile by lobbying from Gambia Sport Foundation and thank God they were able to get some materials there.

The materials from the Gambia Sport Foundation, a Dutch foundation that mainly specialises on supporting The Gambia in the area of sports, are what were presented to JSDA.

The founder of 4Gambia, Mrs Lagerburg-Schutte, said the foundation gives support in different areas, but more so in the area of education.

The foundation has a number of students they are sponsoring, and had helped in building classroom blocks in some schools and given education support in other areas.

The Dutch official said the foundation is opened to more collaboration and possible support to JSDA and Sittanunku village in general.

The chairman of JSDA, Sanusi Darboe, introduced the association to the donors, saying it was formed, among other things, to support the socio-economic development of Sittanunku village in the areas of education, sports, health, among others.

He hailed 4Gambia Foundation for the worthwhile support, saying it has come at the right time as the maiden football tournament organised by JSDA has now reached the final stage.

But the final could not be played because there was no trophy.  Now that 4Gambia donated trophies, the final would be played as soon as possible, Mr Darboe said.

The chairman said JSDA is ready to work and collaborate with 4Gambia in the development of Sittanunku.

A representative of the village development committee of Sittanunku, Dada Manneh, also commended the foundation for the support.

Mr Manneh, who is also a board member of JSDA, said the VDC is grateful for the support since the development of youths and sports in the village is very dear to the committee.

He noted that the donated materials will greatly help in motivating the village youths in developing their football prowess.

Mr Manneh also pointed out that at the moment; one of the pressing priorities for the VDC is to revive the dilapidated village clinic.

Sittanunku had a clinic, built and fenced by the villagers.  The clinic was in operation for a short period, but could not continue.  The building itself is now not in a good condition.

In this vein, the VDC appealed to the Dutch foundation to extend a helping hand in reviving the clinic, not only for the benefit of Sittanunku, but also neighbouring villages that are without any health facility.

4Gambia Foundation was recently among more than 30 Africans and friends of Africa organisations who were awarded the Voice Achievers Award, in recognition of their “outstanding achievements”.