Recently the former Liberian leader, Charles Taylor confessed to sending armed men to fight during the civil war in Sierra Leone. What a hurtful confession!

Was it the best alternative? Was it even right to send troops to a neighbouring country in adversity to fight?

The UN Special Courtreported: "In a surprising move, Charles Taylor reinforced the truthfulness of his former vice president's testimony against him earlier in the trial."

The UN-backed court for Sierra Leone in The Hague quoted him to have said: "To a great extent, Moses Blah (Taylor's former Vice President) told the court the truth."
We do not at all expect this to have come to pass. But all the same, that is what makes history.

Leaders should learn from history, especially African leaders, what lessons Charles Taylor's situation might teach us.

We are told that any time history repeats itself the prices goes up. The first time as farce, the second as tragedy.

The Charles Tailor scenario should be a nightmare from which, not only leader, but all should try to awake and try to behave justly and wisely in whatever we do.

The wise men have also said that human history has become more and more a race between wealth and catastrophe.

If we want to live in the present and the only history that is worth a tinkers consign to hell, is the history we make today. 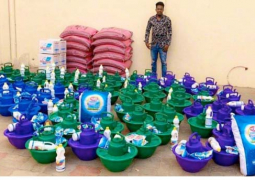