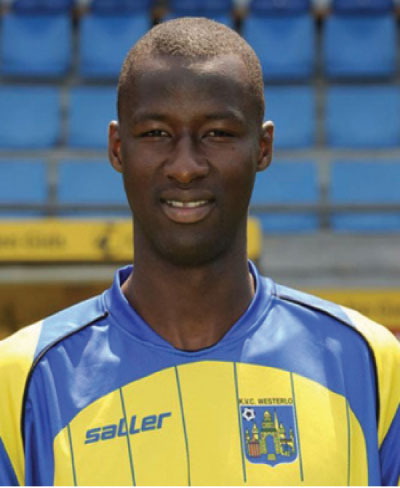 Zilina FC striker and Gambia national team player Momodou Ceesay whose miss- targeted penalty kick denied his side the Solval Cup, which was lost to league leaders Slovan Bratislava, has come over his disappointing experience.

Ceesay who was key in Zilina’s successes, since joining the club last year, has had bad luck in a penalty shootout, which could have kept his side in the race last weekend.  Zilina and opponents were all at 3-3 during the regulation and extra times. But the 2009/10 champions lost it all at  the penalties, when the final score ended 5-4 in favour of  Slovan Bratislava who had everything to boast of  in this year’s campaign, after having now topped the league table with 56 points with a match in hand.

Zilina on Wednesday beat Presov 2-1 in the league, only three days after the cup final defeat to compensate their cup loss. They are currently up three places with 53 points.

In order to keep their title hopes alive, Zilina will have to draw three points out of Dubnica when they travel on the road on Saturday to meet opponents.

“I am sad that we lost the cup”, Momodou Ceesay said on the club’s website.

“I wanted to hit the gate, but the ball ended up on the mast. I am sad and disappointed, but nothing can be done. We played well; at the very end we were able to return to the cup games and the penalty shootout. We started better, but finally fortune smiled on Slovan.  Slovak Cup slipped through my fingers.”