As the year comes to an end, it is vital to note that our national budget has just been read at the National Assembly.

The national budget determines how the government will generate income and revenue, as well as allocate and spend those resources to ensure national development and continuity of our nation.

And while we are busy with the political standoff or the transition bottlenecks, the economic plan and fiscal life of the country is somehow given less attention.

It is, however, essential to note that this is the budget that the next president and government will have to inherit and grapple with, to upkeep the economic health of this country.

Measures to be taken by the government to maintain the economy and keep the country on track have suggested that there will be tough financial reforms in 2017, such as restricting the national budget, reducing the stock of national public debt, and reforming the state-owned enterprises.

In 2017, the government intends to introduce D1 per litre fuel levy in the fuel pump price to replace the annual payment of vehicle license and road tax.

In January, the government is expected, as indicated in the budget, to increase the threshold of the National Education and Technical Training Levy, from a minimum turnover of D500,000 to D1,000,000.

Effective January 2017, Common External Tariff (CET), an Ecowas-wide tariff on international trade, will be implemented by government, in line with other Ecowas countries.

A 0.2 per cent levy on the CIF (cost insurance and freight) value of eligible imported goods emanating outside Africa will also be implemented by government, with effect from January 2017.

These, among other measures, would push up cost in some essential services like transportation and education, while cash flow and money supply will also be restricted, somehow, as government tries to reduce stock of national public debt.

“While some of the reforms may be tough, they are nonetheless needed if we are to restore macroeconomic stability,” the Finance and Economic Affairs Minister said while presenting estimates of the 2017 budget at the National Assembly in Banjul.

This means Adama Barrow’s government has a serious battle to fight on the economic front, after the battle of assuming the reins of power.

Although some would say we wait to get there in order to cross that bridge, it is still essential to start calculating the challenges ahead of us now, in order to build up our strength and morale to overcome what is beyond taking over the reins of power as we struggle to shape our nation for the better.

“Expect obstacles and face them head on. They are going to come up so the way you handle them is what makes all the difference. ” 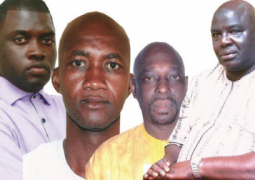