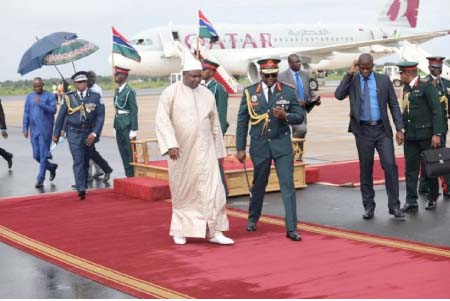 Statehouse has announced that the airport ceremonies that are usually held whenever the President travels, either on arrival or departure, will no longer take place.

“Effective immediately, seeing off the President at the Banjul International Airport shall be limited only to the Minister of Defence, Minister of Interior, Chief of Defence Staff, Inspector General of Police, and Director General of the State Intelligence Service,” the presidency said in a statement.

It stated that the Guard of Honour would now be required only during State Visits and Special Occasions. The adjustment is in line with ongoing reforms to optimize efficiency in the public service.

“Meanwhile, the public is informed that His Excellency, President Adama Barrow will attend the first ever Russia-Africa Summit taking place in Sochi in the Russian Federation, from the 23rd -24th October 2019.”

"Climate Change Could Become A Major Threat To The World"