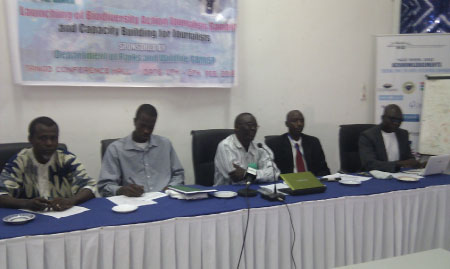 Biodiversity Action Journalist (BAJ) -The Gambia was yesterday officially launched at a ceremony, held at the Association of Non-governmental Organisation (TANGO) conference hall in Kanifing.

Its objectives, among others, was to create public awareness on the environment thematic areas, in a bid to encourage local community’s participation in protecting and conversing the country’s biological and natural resources for prosperity.

In his launching statement, Mr. Bubacarr Zaidi Jallow, principal climate change officer, who represented the Minister of Environment & DPWM, stressed the need for collective efforts to renew, what he called as ‘our commitment to the conservation of the planetary resources.’

“Today’s launching will reflect our minds on the importance of conservation and preservation of our remaining flora and fauna as stated in the 1977 Banjul Declaration and Programme for Accelerated Growth and Employment, (PAGE),” Jallow said.

“BAJ-Gambia is registered as an environmental and natural resources youth led organisation established in December 2010, with assistance from the Department of Parks and Wildlife Management (DPWM),” said Abdou Rahman Sallah, BAG-Gambia’s national coordinator.

While noting that they have participated in many activities nationally, regionally and internationally, he commended the efforts of their partners.

“BAJ-Gambia has five strategic objectives, such as capacity-building, campaign, networking, shared learning and fund-raising for sustainability,” he said.

Sallah finally appealed for support from the government, NGOs, UN agencies, and other agencies.

Speaking earlier, Ousainou Touray of DPWM, reassured BAJ for it department’s support, noting that it is the beginning of a very long process. He assured that they will support them with the requisite skills to better inform the masses.

Gibril Barry, focal point person for the environment, MOBSE, said it is the collective responsibility of every one in society to educate and empower the future generations, so as to take ownership of the environment.

Hon. Samba Bah, representative of the NAM selected committee on agriculture and environment commended BAJ for coming up with such a laudable imitative.