Augustine Kanjia, a reporter and columnist with this paper, who was arrested last Monday for taking photographs of the crowd outside the Kanifing Magistrates' Court during the trial of fellow journalists, who are standing trial on three counts of seditious publication was yesterday afternoon released on bail.

He was asked to report back to the Serrekunda Police Station today. 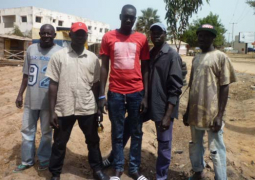