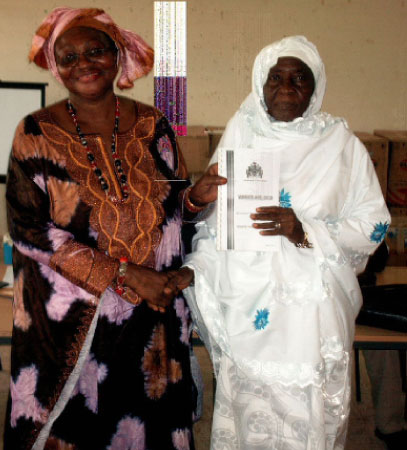 The Association for the Promotion of Girls and Women Advancement (APGWA) in partnership with the African Centre for Democracy and Human Rights Studies (ACDHRS) on 26th September 2011 concluded a three-day capacity building workshop on raising awareness of women leaders and the local authorities on implementation and enforcement of the Women’s Act 2010.

The discussions also touch on the linkages between human rights and development, and were held at the regional education conference hall in Janjangbureh, CRR south.

According to officials, the objectives of the programme include to empower women leaders and local authorities in the promotion of women’s rights and good governance in order to enhance national development through the effective application of the Women’s Act 2010.

The training was jointly conducted by the Executive Director APGWA, Mrs Binta Jammeh Sidibeh and Mr Amadou Ceesay program officer from the ACDHRS.

The program seeks to introduce women leaders to rights-based approaches in implementing the Women’s Act 2010, and making duty bearers to understand that women are partners in development.

Ganyi Touray the Governor of Central River Region underscored the significance of the Act, noting that this Act has provided legal support for Gambian women, and now is time for the women to take their rightful position in implementing the Act.

According to him, this is what exactly APGWA is doing by capacitating the women to lead in promulgating the rights of Gambian women.

“Rights-based approach to development simply means citizens are rights holders who have a right to development, and that state institutions and officials are duty bearers who are obligated to provide development goods and services to the people” he added.

According to her, the gender gap is too large and her organization has come to bridge the gap by empowering the women folk on their rights to education, equal opportunities and in decision making at all levels.

“As a women’s organization, we are purely supporting women in terms equipment, adult literacy, skills acquisition and advocacy for eradication of harmful traditional practices and all forms of discrimination against women at all levels,” she said.

She commended ACDHRS for providing the strategic support through Oxfam in in promulgating the rights of women and children on the continent.

Amadou Ceesay program officer ACDHRS said the African centre is a continental organization responsible for protecting and promoting human rights in the continent. ACDHRS through Oxfam Great provides funds earmarked for a campaign for the ratification, popularization and domestication of rights of women in ; thus, it’s role toward the implementation of the Women’s Act 2010 which has incorporated both CEDAW and the protocol.

This project is called. “Raising Her Voice Project”, according to Mr. Ceesay, and the workshop was meant for Gambian women to know their rights and responsibilities in the implementation of the Act.

According to him, the training of these pressure groups is vital to disseminate the information at grass roots level; further noting that sub-committees at district level would be constituted that will work hand in glove with the local authorities in ensuring that rights of women at all levels are protected  and  promoted.

I Am Ready to Play for My Country - Pa Dembo Touray