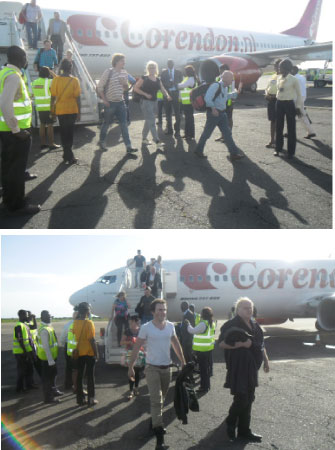 Some 85 tourists arrived in the country on Monday on board a Corendor flight making the commencement of this year’s tourist season.

The officials from the Ministry of Tourism and Culture and officials from The Gambia Tourism Board were at Banjul International Airport to receive the first tourist arrivals.

The Tourism permanent secretary hailed Corendor for brining this year’s first batch of tourists to the country.

He added that Corendor is working very aggressively to promote the Gambian market.

“Right now our challenge is not only about tourist arrivals, but also working to have quality accommodation to meet the demand of tourists,” he said.

Mr Joof said that some of the hotels are doing their renovation work, and hoped that by the end of October some of them will be ready to take some tourists.

According to him, this new dimension in tourism will actually register more numbers of tourists. He thanked the Minister of Tourism and Culture in collaboration with The Gambia Tourism Board for making all efforts to have more tourists’ arrivals in the country.

Mr Njie added that altogether they are expecting seven flights from the same destination.

Mr Njie told journalists that Corendor is aggressively marketing The Gambia in Europe, and that this was being done with the efforts of the Ministry of Tourism in collaboration with The Gambia Tourism Board.

He added that the entire tourism stakeholders are working as a team to make sure that they do more to penetrate in all the source markets.