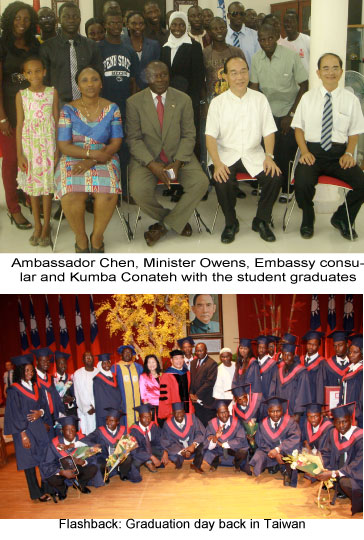 Twenty-three Gambian students who were studying at the National Pingtung University of Science and Technology in Taiwan have finally returned home after successfully completing their studies.

The young graduates, who formed an elite class of agriculture students, were welcomed at a ceremony held at the Taiwan Culture Centre located at GNPC complex in Bakau.

In welcoming the students, Taiwan ambassador Samuel Chen said that after four years of studies in Taiwan the students must have learnt a lot not only about agriculture but also about the culture and people of Taiwan.

The students can finally reunite with their families after four years of studies abroad.

Agriculture is very much important for The Gambia as it’s the backbone of the country’s economy, he said.

“I know very well that The Gambia needs a lot of agricultural experts and you are the assets of your government,” he told the graduands.

According to him, President Jammeh is personally very much committed to agricultural development.

Ambassador Chen encouraged the former students to work with the government to develop the agriculture sector as well as urged them to join the Taiwan Alumni Association (TAA).

He hailed the Gambia government for cooperating with Taiwan in the execution of the special training programme.

According to Ambassador Chen, ROC as an ally attaches great importance to higher education in The Gambia.

As such, he noted, they have arranged various types of scholarships including ICDF and MOFA study programmes, special Elite Classes in many fields including agriculture, petroleum, medicine, architecture and engineering for Gambian students to study and enhance their abilities.

He said that through the bilateral cooperation and tailor-made educational project, the ROC government is not only helping the Gambian students to pursue their dreams, it is also assisting the Gambia government to create better human resources.

Ambassador Chen disclosed that currently there are about 200 Gambian students studying in Taiwan.

According to agriculture minister, the development is unprecedented to have a high agriculture graduates at one time.

He assured the graduates that the government will provide employment for all of them as plans to absorb them in the system have been laid.

Minister Owens said he was pleased that some of the students are agriculture engineers, agric business experts, vet medicine and animal science among others and said their inputs are highly needed by the country.

He thanked the government and people of Taiwan for supporting the human resources development of the country.

The Taiwan Alumni Association president and the DPS at the Ministry of Finance, Madam Kumba Conateh NAM, encouraged the returnees to join the alumni association.

Speaking on behalf of the graduates, Ebrima Ceesay thanked the governments of Taiwan and The Gambia for facilitating their studies.

He said they are ready to serve the country with the knowledge and skills they have acquired from Taiwan.